Unbearable beauty of the bare and the basic 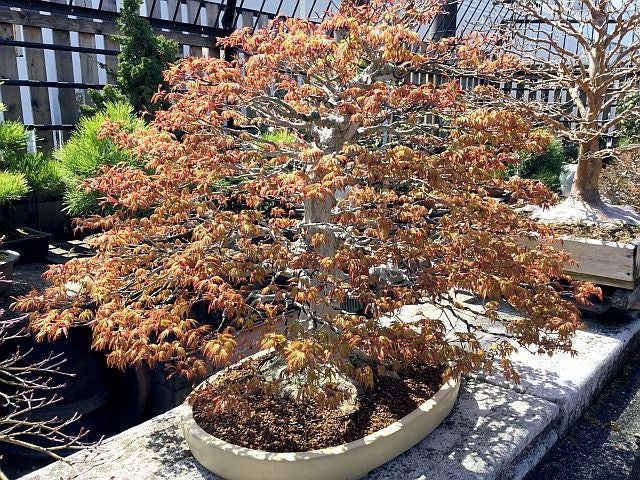 OUR recent Japan trip at the beginning of spring this year was more than just a weeklong R&R and sightseeing. It was a spiritual quest. Any artist somehow, at a certain point in his creative life, is confounded by doubts and profound questions on his life, his work, which directions he must take both, or where both may take him; the dilemma of creating amidst a milieu diluted by materialism and instant gratification.

Other than that, an artist fears the beginning of his death (as an artist) when his creative work hits a wall. Or, his doubts about his work begin to get in the way of creation.

In this sojourn in the land of sakura and samurai, we were two travelers, coming from different generations, disciplines and background. While one of us practices traditional Japanese bonsai art and landscape design, the other is a long-time avid follower of Japanese fashion and design innovation.

But both of us are in the middle of our respective design careers and artisanship where we long to do more, feel the need to take a leap forward with an aesthetic paradigm that veers away from the status quo, the hackneyed and formulaic.

And all these we find in the age-old Japanese aesthetic and philosophy they call wabi-sabi. Thus our search for a deeper understanding of wabi-sabi begins. 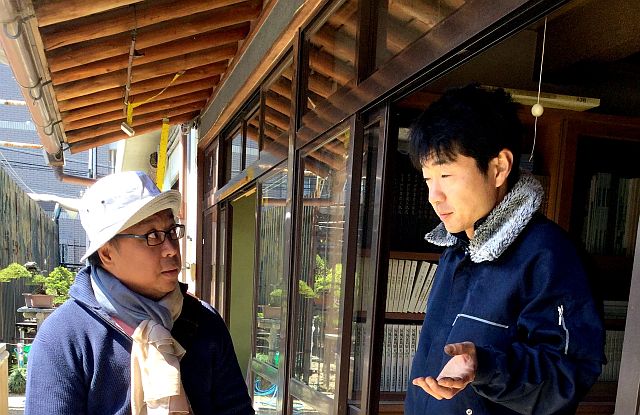 On the first day of spring, we arrived in Osaka, our entry point to our long journey towards Tokyo. First order of business upon landing at the Kansai International Airport was to find Fujikawa Kouka-en, a small but very popular bonsai nursery and garden in Ikeda, a suburb in Osaka. We thought perhaps we could chance upon its second-generation owner, Mr. Keiichi Fujikawa, a well-respected bonsai nurseryman in the Kansai area. Having
apprenticed under Saburo

Kato at Mansei-en, Mr. Fujikawa has devoted his life to the progression and development of bonsai art and appreciation in Japan and abroad. So, we were hopeful that Mr. Fujikawa could help us in understanding the essence of wabi-sabi, most especially in bonsai art.

After settling at our hotel, overlooking the harbor in Izumiotsu, we had to seek help from one of the front desk personnel. Because the young man barely spoke English (oh well, everyone we met along the way to our destination in Ikeda hardly spoke English or none at all) we had to ask him to write everything down on a piece of paper, which train line to take, in what station we must embark or get off. Everything else we had to do by ourselves. 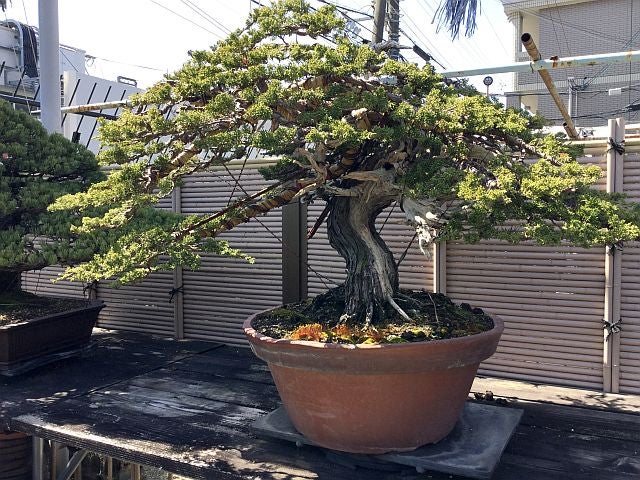 We left the hotel on a Tuesday morning, at 6°C temperature, and took a 15-minute leisurely walk to our nearest station, the Izumiotsu station. We took the Nankai Line to Shinimamiya, which was 20 minutes away. From Shinimamiya, we transferred to JR Line, another 20-minute ride to Osaka Station. From there, we took a short quick walk to Umeda station to catch the Hankyu Takaruza Line for yet another 20-minute ride to Ishibashi station in the city of Ikeda.

The challenge in this part of our trip was to get to each train station right on time to catch the first train that would take us to the next station. (There was no time for picture-taking, not even inside the grand Osaka station which was a modern Japanese architectural marvel.) With some negotiating skills, despite the palpable language barrier, we had to make our road to Ikeda possible. 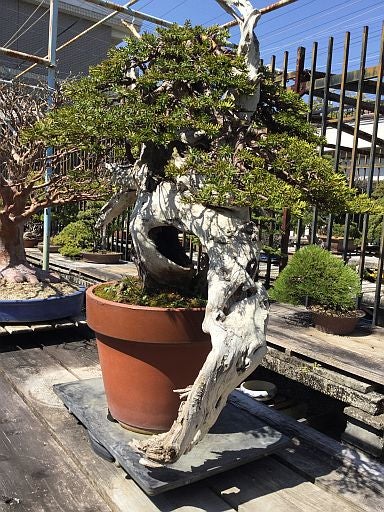 Two things we must hurdle: one, not all the ticket machines had English translation; and secondly, one must know which platform to go to. But based on this experience alone, the Japanese people, we must say, are the most polite people on the planet. Although they hardly spoke English, they were very helpful to these two soul-searchers lost in Japan. And they were quick with their Google maps and translation apps when most needed.

We reached the Ishibashi station almost lunchtime, Upon exit, we found ourselves on an alley, decorated with colorful banners and lamps. Small restaurants, specialty stores and souvenir shops lined on both sides of the street. In this part of the Osaka Prefecture, the pace is rather slow. People bike from their homes to their offices or to buy stuff on this shopping street near the station.

Fujikawa’s bonsai garden is a 20-minute walk from the station. A young fellow we met outside the shopping street was kind enough to get us a cab give instructions to the driver where to take us. We were so relieved that finally we were getting closer to our destination. In about five minutes, we were already right outside the revered bonsai garden of Fujikawa.

All of a sudden, the world stood still once we entered the garden. An overwhelming sense of peace set in, in this stillness. The work of Fujikawa up close lends you that feeling. We have waited this long to see how the branches of the white pine trees face towards the blue Osaka skies in true Chokkan fashion; how the roots, slightly jutting out of the ground, are radially arranged around their tapered trunks; to see the tiny red leaves of the Acer species, specifically the Japanese trident maple tree, flutter softly like feathers.

One particular bonsai that got our attention was this maple tree done in Japanese Moyogi takichi style. This informal upright maple tree has interesting features: one, its age as evidenced by its buttressed trunks, its gnarled branches, its trunk perfectly tapered to the top; two, its branches were properly decided like its outstretched arms as if in supplication towards the heavens. Upon closer inspection, its miniaturized leaves have started to open like tiny red flames.

After shuffling from one aisle of bonsai to another, we found the very famous bonsai of Fujikawa: the white dragon, a juniper tree whose live branches intertwined with its dead (jin) branches. While meditating on its beauty, that feeling of wabi-sabi sank in. 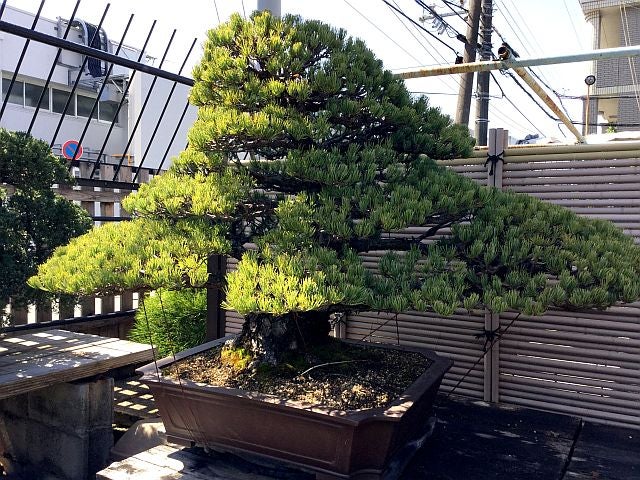 But what is wabi-sabi? The garden’s resident bonsai artist and trainer, Naoki Maeoka, was finishing his lunch inside his small room beside his workshop when we approached him. He explained to us, “wabi and sabi are two difficult words to define, even Japanese people can hardly explain it.”

Maeoka, an Osaka native, has been studying bonsai for two decades. Educated in art and design, he spent a number of years as a graphic designer before working under the tutelage of Fujikawa at Kouka-en. He now also teaches at the Fujikawa Nursery.

Literally, wabi means despondence or poverty, and sabi means solitude or loneliness. In Zen Buddhism, through which wabi-sabi was introduced to Japan, wabi refers to harmony, peace and balance. It is a way of life or spiritual path. Sabi, then, is the application of this philosophy into objects, or in art forms, as an aesthetic principle.

In modern Japan now, Maeoka lamented, not too many people appreciate the beauty of wabi-sabi. In bonsai context, wabi refers to a bonsai artist’s lack of reliance on material possessions but on simplicity of one’s life. It transcends material wealth while it puts emphasis on wealth of mind or spirit.

Meanwhile, sabi, which literally means “the bloom of time,” connotes the kind of beauty that can only come with age. Rooted in Zen philosophy, sabi refers to antiquity, simplistic primitive design, devoid of modernism.

Wabi-sabi, thus, is an aesthetic experience that finds beauty in things imperfect, impermanent and incomplete. It is the beauty of things modest and humble, and our acceptance of the beauty in the natural cycle of growth, decay and death.