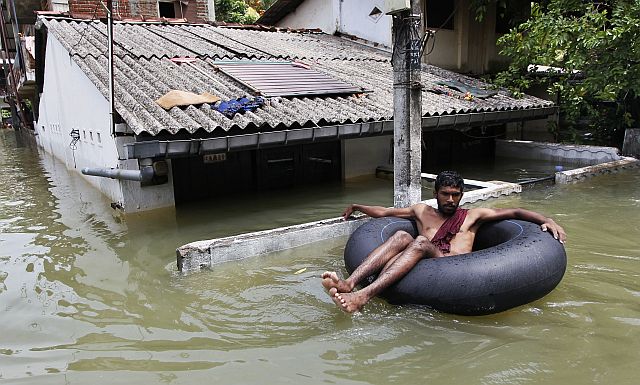 A Sri Lankan man uses an inflatable tube to move through a flood-affected area in Wellampitiya, in the outskirts of Colombo, Sri Lanka. (AP)

COLOMBO, Sri Lanka — The death toll from landslides and floods in Sri Lanka as a result of week-long heavy storms has risen to 92, officials said Sunday.

Soldiers searching for victims of landslides that buried three villages in the central hills pulled out eight bodies from the rubble, the Disaster Management Center said, adding that 109 people were still missing in the landslides.

Maj. Gen. Sudatha Ranasinghe, who is coordinating search efforts in the landslide-hit district of Kegalle, said he hopes to pick up the search as the weather conditions turn favorable.

The rain had stopped in many parts of the island nation on Sunday, and waters were fast receding from the flooded streets of the capital, Colombo.

More than 185,000 people who are still displaced are being housed in schools and religious places.

In Bangladesh, a cyclone unleashed heavy rain and strong winds on its southern coastal region on Saturday, killing at least 11 people and forcing hundreds of thousands from their homes.

Local media say the deaths were caused by the collapse of houses in Bhola, Chittagong, Cox’s Bazar and Patuakhali districts. Cyclone Roanu crossed the southern coastal district of Cox’s Bazar and weakened after triggering rains.

The meteorological office said in a statement that dozens of villages had been submerged by floodwaters.