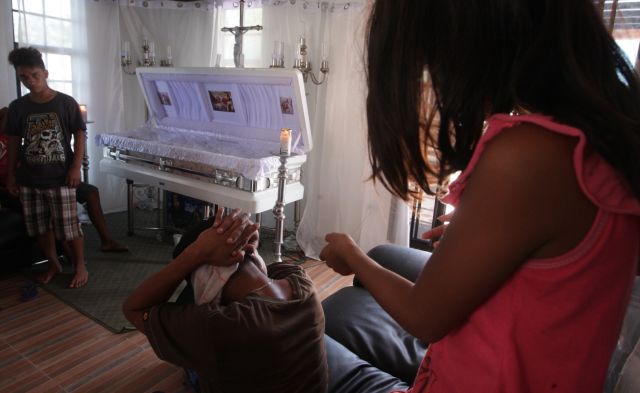 A child-witness demonstrates to CDN how suspected drug lord Rowen “Yawa” Secretaria was shot by the police during the raid last Saturday dawn on Banacon Island. She was with the slain suspect when the police swooped down on Secretaria’s property. (CDN PHOTO/TONEE DESPOJO)

It was like a scene straight out of an action movie with a bloody ending, and a 10-year-old girl who witnessed it and the real life killings might yet be taken under the wings of the Department of Social Welfare and Development (DSWD) for her own protection as she bravely stood to tell her story of a police operation in Getafe, Bohol that purportedly went awry.

Yesterday, DSWD Region 7 got hold of the Getafe Municipal Social Welfare Development Office (MSWDO) to order an assessment on whether or not the girl should be placed under the custody of DSWD for her safety.

“If the parents are unfit to take care of the child, then we will take over. There will be stress debriefing and psychological assistance (given) to the child,” said Lea Quintana, information officer of DSWD 7.

In a visit yesterday to Banacon Island, Getafe, site of a reported shootout between policemen and the group of Cebu City’s number 3 most wanted man, Rowen “Yawa” Secretaria, Cebu Daily News chanced upon 10-year-old “Ana” (not her real name), a little girl from Barangay Ermita, Cebu City who told her story to anyone who cared to listen.

Ana claimed that she witnessed from start to finish the police operation conducted Saturday dawn by a joint team from the Regional Anti-Illegal Drugs Special Operations Task Group in Central Visayas (RAIDSOTG-7), Regional Public Safety Battalion (RPSB), and the intelligence branch of the Cebu Provincial Police Office as she was visiting the island with her father for the village fiesta.

It was at the crack of dawn, she said, when she and her “Kuya Rowen” were lying lazily on a cot in a beach cottage watching some relatives visiting from Ermita prepare an early breakfast when at least three pumpboats suddenly docked at the port, a few meters from where they were.

“Pag-abot nila didto, niingon pa si kuya Rowen nga mga bisita rato namo pero naa nay sunod nga buto-buto ug nagdinaganay na (When they arrived, Kuya Rowen even said that they might be our visitors but then what followed was a burst of gunfire and people scampered),” Ana recounted, adding that Secretaria tried to run from the port towards the interior part of the village but a policeman was able to shoot at Secretaria’s leg.

Some of their relatives, however, were able to run to safety while others who were in the area were instructed to lie on the ground, she said.

“Pagkaigo niya kay iya gibutang iyang duha ka kamot sa iyang ulo, surrender na tingali si Kuya. Human gipangutana siya kung kinsa siya, nibalibad siya nga siya si Yawa (When he was hit, he put both his hands on his head, maybe he was surrendering. After that a police officer asked who he was, but Kuya Rowen denied that he was Yawa),” said the 10-year-old girl. 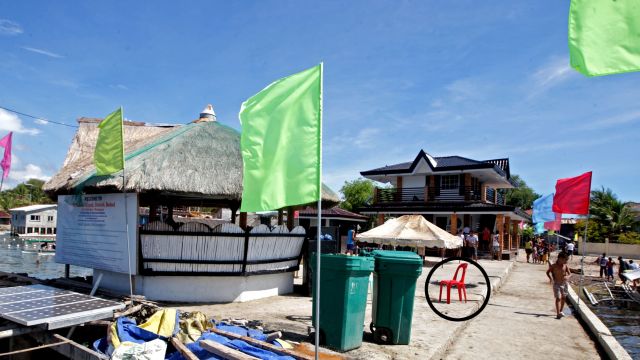 This is the area where suspected drug lord Rowen Secretaria and Dario Torremocia (encircled) were gunned down by the police. At left is the gazebo where 22- year-old John Jason Montes slept when police raided Banacon Island early Saturday morning. (CDN PHOTO/TONEE DESPOJO)

Ana claimed that a policeman brought her aside and asked her to run to the house so she would be safe just in case.

But from a window of Secretaria’s house, she said she could see a policeman shoot an unarmed Secretaria on the stomach.

The policeman, she further claimed, asked Secretaria to look down before a final shot on the head was fired.

“Nidagan rako didto, sige nako siyagit kay si Kuya Rowen lage hasta pod si Kuya Jason kay ila gipusil diri jud sa heart (I just ran and I was screaming because they shot Kuya Rowen and Kuya Jason, whom they shot in the heart),” she claimed. Ana said that both Secretaria and Jason Montes, the 22-year old painter from Ermita whom police claimed was Secretaria’s cohort, were both unarmed.

“Ila raman to gipamusil, mobunot gani unta to ang akong usa ka uncle pero gipugngan ni Kuya Rowen kay iya ra silang padaganon (They just shot them. My uncle was even going to pull out his gun but Kuya Rowen stopped him and just told them to run),” she said.

According to Ana, Montes was sleeping at the upper portion of the hut when police operatives asked him to go down.

As he was going down with his hands raised in apparent surrender, Montes, the girl said, was shot several times by policemen.

The girl said that she was hysterical after seeing both her Kuya Rowen and Kuya Jason killed but she heard policemen shouting in unison, greeting them all a “happy fiesta” before doing a high five.

Susana Montes, mother of Jason, yesterday sought the assistance of the Commission on Human Rights (CHR 7) to look into the death of her son.

Leo Villarino, officer-in-charge of the Investigation Division of the CHR 7, urged Montes to allow an autopsy to be conducted on the remains of her son to assist in their investigation.

Villarino said they wanted to determine if the police followed rules of engagement when they served the arrest warrant on Secretaria in Banacon.

He said Susana will confer with her family first about an autopsy. Susana, he said, asked for time to bury her son.

(An autopsy is very important because this will be the bases for knowing the nature of the wounds and how many wounds were inflicted.)

The CHR official also said this will be an opportunity for the police to explain their side.

As police denied that Saturday’s raid on Secretaria was a rubout and insisted that it was the latter who shot at them with high-powered weapons, Sr. Insp. Henriz Bancoleta of the RAIDSOTG-7 said, “A KG 9 assault pistol is very dangerous. It releases bunches of bullets in an instance. And we know Secretaria had several cohorts.”

When Secretaria noticed the presence of policemen, Bancoleta said the suspected drug lord immediately fired shots at them using a KG 9 assault pistol, contrary to the claim of the child witness.

The raiding team, he said, then retaliated.

Police Regional Director, Chief Supt. Patrocinio Comendador downplayed claims by relatives of two of the slain suspects, Dario Torrimocia and Montes, that the latter were helplessly killed by the police.

“Our policemen went there after receiving a solid information. We had an oplan and it was executed well. Our troops won’t get there just to take chances,” the police general said.

“But I’m asking the parents (of Montes), why is the boy in the company of Secretaria? We raided Secretaria’s house at least three times in the past. That means people should know that he has been pursued by authorities,” Comendador added.

Comendador yesterday bared his plans to send troops and establish a police detachment in Banacon Island.

“We want to control the island because it has become a transshipment point for illegal drugs. That place has been left out for some time, and we need to come in and clean the place,” said Comendador in an interview yesterday.

Banacon has no police station. The nearest police headquarters is in mainland Getafe, about a 30-minute pumpboat ride away.

Comendador said members of the Regional Public Safety Battalion will be detailed in the islet in seasonal rotations to avoid familiarity and getting influenced by drug couriers.

When CDN visited Secretaria’s wake on Banacon Island yesterday, his two daughters, aged 14 and 3 years old, were around together with Secretaria’s sister who refused to be interviewed.

Other relatives, however, said that Secretaria’s wife was still in shock and opted to stay in their house in Ermita out of fear (See separate story on page 2). They said she had asked her older daughter to send her pictures of the wake instead.

A relative who spoke on condition of anonymity told CDN that Secretaria did not deserve to die that way though he might have been engaged in illegal drug activities “a long time ago”.

She claimed that Secretaria, whom police claimed was one of Cebu’s biggest drug dealers, owned a jewelry business at the time of his death, trading gold necklaces and other items sourced from a Chinese supplier. “Wala pa mi plano kung unsa man. Pero for sure diri rani siya namo ilubong kay mao man to iyang hangyo sa amo saona nga kung unsa may mahitabo niya, diri siya ibutang (We have no plans yet. But for sure, he will be buried here (Banacon) since it was his wish that whatever happens to him, his remains shall stay in the island),” said a relative.