GET OUT OF TALISAY OR ELSE… 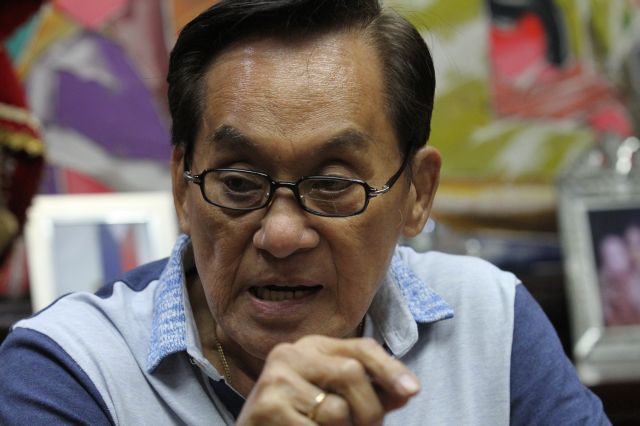 Talisay City Mayor-elect Eduardo Gullas warns drug traders that he will go after them with “hammer and tongs” if they will not leave his city alone. (CDN PHOTO/JUNJIE MENDOZA)

With just about 24 days before he assumes as the new mayor of Talisay City, former Cebu first district Rep. Eduardo Gullas warned drug lords: Get out of the city or face his wrath.

But unlike incoming Cebu City Mayor-elect Tomas Osmeña, there will be no cash rewards for policemen who will kill or injure suspected offenders while in pursuit of a drug lord.

“While I respect other mayors to decide on what they’ll do, the rule of law is ingrained in me,” he told CEBU DAILY NEWS in a phone interview yesterday.

Gullas stressed that he would make sure to rid Talisay City of criminal elements, but it would have to be done by following the rule of law.

“I am lawyer. Four years of study of the rule of law. Preparations for the bar; another three months. It’s ingrained in me. A member of the Philippine bar and at the same time an officer of the court. So I live by the rule of law,” Gullas told reporters.

But first, Gullas said, he would want to meet with the suspected drug personalities in his city, as he had done in the past when he was mayor of the city in 2001 and got their commitment to stop their drug trade in the city.

If they would not heed his call, Gullas said, he would go after them with “hammer and tongs.”

(I am not telling them that they get out from Talisay and go instead to Cebu City. No. Get out from the province. You decide on where to go but do not stay here because I will go hammer and tongs against you.)

According to Gullas, the drug personalities he would want to meet now are those whose names were contained in the Talisay City Police Office’s (TCPO) list that was submitted to him in 2001, during which time he served as mayor of Talisay City.

He said he revisited the 2001 list to ensure that he would not be going after the wrong person or if there would be a need to add new names into the list. Back then, the meeting yielded results, said Gullas.

“Dunay namalhin. Dunay nangguwa (There were those who transferred. There were also those who went out),” he said.

The list, according to Gullas, was based on the “registration form” that these suspected drug lords signed and filled up during that meeting held at the Talisay City Hall in 2001 after he was elected into office as new city mayor.

“That (they registered) was an admission. They knew that that meeting was a meeting of drug lords,” he told CDN.

Asked if there was any agreement or condition set before the meeting, Gullas said there was none and there were some of them who attended. But he said he could no longer remember how many were there at that time.

For this year, Gullas said he would still have to update his list and get in touch with them and send invites for a meeting at the city hall sometime in July.

But he issued another warning if these drug lords would not heed his call.

When sought for clarification on what he meant by this, Gullas said he will follow legal procedures and implement the rule of law by implementing the warrants of arrest against these criminals by the city’s policemen.

Gullas said he has a personal choice as to the city’s next police chief, but he would not want to recommend as yet a replacement for Supt. Germano Mallari, the police chief of TCPO.

Gullas said he would make the decision when he has already assumed as mayor of the city and after observing and evaluating the performance of Mallari.

In a separate phone interview, Mallari told CDN that eliminating the drug problem in the city would mean cutting off the source of these drugs.

Mallari said the information they gathered showed that most of the persons supplying drugs in Talisay were from Cebu City and other neighboring cities and towns in southern Cebu.

“Daghan man og entry points (There are a lot of entry points),” he added, citing that drug suppliers either travel by land or they hire a motorized boat and go to Talisay City.

He said they have identified the top three barangays in the city where the problem on drugs is prevalent, namely, Tanke, Bulacao and San Roque.

He specifically identified Barangay Tanke as the area that has the most number of cases related to illegal drug trade.

Most of those who are operating in the barangay are street level drug pushers who are either a resident of the village or from Cebu province, he added.

Mallari said the Talisay City police force has been in the forefront of fighting illegal drugs in the city. He cited numerous arrests and drug raids, but he could not give a specific data since these are stored at their database at the police station.

One of the challenges they met in addressing the drug problem includes the non-cooperation of the barangay officials for fear of their lives.

But Mallari emphasized that they have not received any information that these barangay officials serve as protectors of these drug personalities.

Once Gullas has assumed his post, Mallari said they would also submit a proposal for the improvement of the logistics and operations of TCPO.

For one, he said, he would ask the incoming administration to provide their Special Weapons and Tactics (SWAT) policemen with motorcycles so they could help patrol the city’s streets.

He said he would also request from City Hall additional communication equipment and to increase the number of volunteers for the so-called “force multipliers.”

There are currently 80 policemen in the city but only 25 of them, and an additional eight SWAT members, are assigned to patrol the city streets, he said.