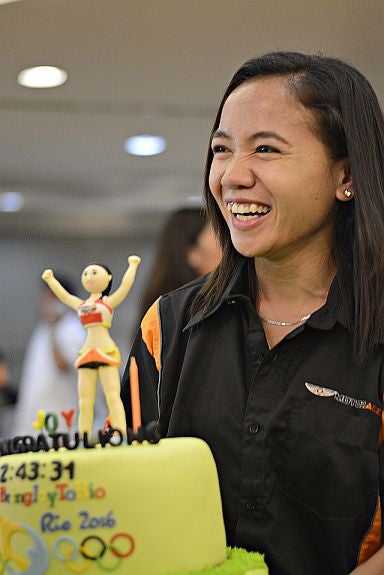 This after Motor Ace-Kawasaki Racing Team president Jonel Borromeo said during a victory party for Tabal last Monday night at the Casino Español that the team has spoken with the Philippine Athletics Track and Field Association (Patafa) and has agreed to work on the reinstatement of the Cebuana marathon champion so she can compete in the Olympic Summer Games in Rio de Janeiro, Brazil this August.

The 26-year-old Tabal made the qualifying time for women’s marathon in the Olympics after clocking a personal best of two hours, 43 minutes and 31 seconds in the Scotia Bank Ottawa Marathon in Canada, one of two International Association of Athletics Federation (IAAF) gold-label road races in Canada. Her time was more than a minute clear of the 2:45 Olympic qualifying mark.

But Tabal wasn’t officially named a representative of the country to the Olympics until she is reinstated to the national team by the Patafa, which she left after winning a silver in the 2015 Southeast Asian Games.

Boromeo said there’s a very big chance she will be reinstated by Patafa after he and Juico agreed to terms during their meeting last Friday.

“It was a very fruitful meeting. We have agreed to go through the procedure. We will request for her reinstatement because it is necessary for her to be recognized as a national team member. We will send the letter tomorrow (Tuesday),” Borromeo said.

He clarified that it’s not true that one of the requisites of being reinstated is to drop her corporate sponsors. He said Patafa allows private entities to sponsor athletes with an agreement that they are allowed to monitor their deals and sponsorships to prevent exploitations.

Borromeo also said in an Inquirer report earlier that Tabal and Patafa had a misunderstanding when she left the team after the Southeast Asian Games. Tabal has since been supported by the Motor Ace team of Borromoe.

“It’s water under the bridge; it’s finished,” said Borromeo about the misunderstanding. “Our goal is to move forward on a positive note, so that we can send the first Filipino marathoner to the Olympics.”

Borromeo assured everyone last Monday night that the team is willing to do everything to help Tabal compete in the Olympics.

“I would look at this situation in a very optimistic way and we are very willing to follow all of the procedures Patafa will give us to reinstate Joy. We will make no shortcuts and will follow the procedures accordingly,” added Borromeo.

Tabal, meanwhile, is eager to move forward and focus on her preparation for her dream race in Rio. She again thanked the her team, family, friends and fans for their nonstop support.

“I can’t imagine myself here fulfilling my dreams without them. A simple thank you is not enough to pay [for] all the help they have given me,” Tabal said during her emotional speech in the victory party.