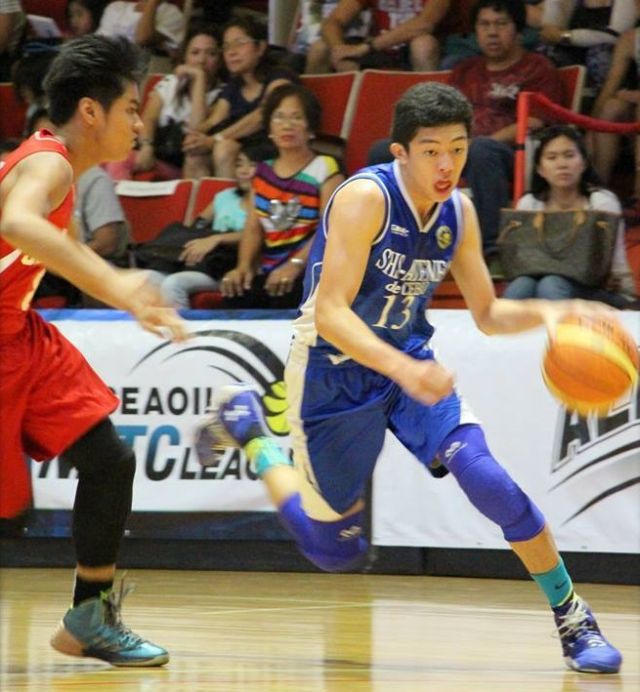 Jed Colonia (13) will be strutting his wares in the Basketball Without Borders Asia scheduled on June 23 at the Dandenong Basketball Stadium in Melbourne, Australia.

Reigning Cesafi juniors MVP Jed Colonia of the Sacred Heart School-Ateneo de Cebu has been invited to join the Basketball Without Borders Asia on June 23 at the Dandenong Basketball Stadium in Melbourne, Australia.

Colonia helped lead the mighty Magis Eagles to their third straight high school crown in the Cesafi last year. In addition, he also represented the country for the Batang Gilas squad that won gold in the SEABA Under-16 Championship in Cagayan de Oro.

Colonia’s efforts has not gone unnoticed as he made the cut from the 45-member pool that was submitted by Fiba to the NBA.

He will be joined by two other Filipinos—John Mark Lagumen, and Jr. NBA Philippines 2014 All-Star Paul Matthew Manalang.

This marks the first time that the NBA and FIBA’s global basketball development and community outreach program will be held in Australia. BWB will celebrate its 15th anniversary this summer.

BWB Asia will bring together the top male players born in 1999 from around the Asia-Pacific region to learn directly from NBA and FIBA players, legends and coaches and to compete against the best young players from the region.

BWB Asia will also include a girls camp for the top female players in Victoria and a Jr. NBA camp for local youth.

“We are pleased to partner with FIBA and the NBL to bring the first Basketball without Borders camp to Australia,” said NBA Asia Managing Director Scott Levy. “The league has seen a surge of Australian talent in recent years, and we look forward to supporting the next generation by giving them a platform to showcase their skills alongside their peers from throughout the region.”

“This historic, first-ever NBA and FIBA Basketball without Borders Asia Camp in Australia presents an incomparable opportunity for players from many countries throughout Asia and Oceania,” said Camp Director and President of the World Association of Basketball Coaches (WABC) Patrick Hunt.

“The players and coaches will work with the campers to enhance their skills, shape their character, and teach values that lead to success in life and our wonderful, global game.”