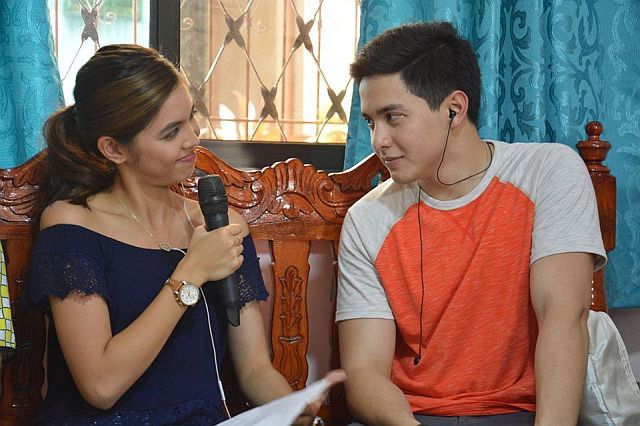 Maine Mendoza reads her poem-turned-song to Alden Richards during an episode of Eat Bulaga’s Kalyeserye.

THE LONG wait for the first solo movie of phenomenal love team Alden Richards and Maine Mendoza is almost over.

On Tuesday, both Richards and Mendoza shared poster teasers on their respective social media accounts, giving a glimpse of their movie that will be shown in cinemas next month.

Mendoza first shared on Twitter a photo of her riding a bike along a boulevard by a lake with the caption, “All my life I was seeking for someone I can call my own.”

Shortly after, Richards posted on Instagram a teaser photo of him sitting with Mendoza on a wooden bench, basking in the sunlight, before a lake. He captioned the photo with “Can’t wait.” On his Twitter account was the same poster but with emojis of a boy, a red heart and a girl.

Both their tweets were immediately retweeted, shared and liked by their fans.

Their second team-up on the big screen entitled “Imagine You and Me,” (they played supporting roles in last year’s Metro Manila Film Festival entry’s “My Bebe Love”) is the phenomenal loveteam’s gift to their fans in celebration of their first anniversary as a couple in “Eat Bulaga’s” Kalyeserye, where they play the roles of Alden and Yaya Dub.

Alden, Maine, executives of APT Entertainment (which is producing the film along with GMA Films), production crew and staff flew to Italy last month and spent three weeks there to shoot scenes for the movie.

Meanwhile, GMA Network reported that comedian/host Vic Sotto was all praises for Maine for writing the “heartfelt” lyrics for the movie’s theme song.

In a press conference this week for his new sitcom, “Hay Bahay,” Sotto also happily shared that Mendoza will also sing the song herself. Seasoned musician Jimmy Antiporda will take care of the song’s arrangement.