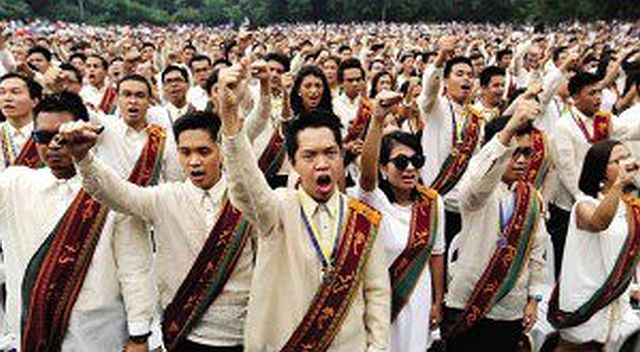 University of the Philippines graduates sing “UP Naming Mahal.” (INQUIRER.NET)

Eight Philippine universities figured in the latest Asian university rankings released by Quacquarelli Symonds (QS) on Tuesday, with University of the Philippines and Ateneo de Manila University as the country’s representatives in the top 100.

UP is still the top university in the country as it ranked 70th in the 2016 QS University Rankings for Asia, the same as last year. Following UP is AdMU which jumped to 99th place from 144th in 2015.

Among the country’s “Big Four” schools, University of Santo Tomas (UST) is the only one that fell in its ranking. It is now in 157th place from last year’s 143rd spot.

Despite the slip in the rankings, UST is still the sole Philippine tertiary educational institution that secured 4 QS stars after garnering excellent marks in terms of employability, facilities, social responsibility and inclusiveness.

With the QS ranking expanding its list to include 350 schools in the region, three Philippine universities debuted on the list.

Silliman University in Dumaguete and Xavier University in Cagayan de Oro were included in the 251-300 bracket in the QS rankings. University of San Carlos in Cebu debuted in the 301-350 bracket.

This year also marked the return of Ateneo de Davao University on the list, securing a spot in the 251-300 bracket.

For the third year, the National University of Singapore was hailed as the best university in Asia, gaining an overall score of 100.