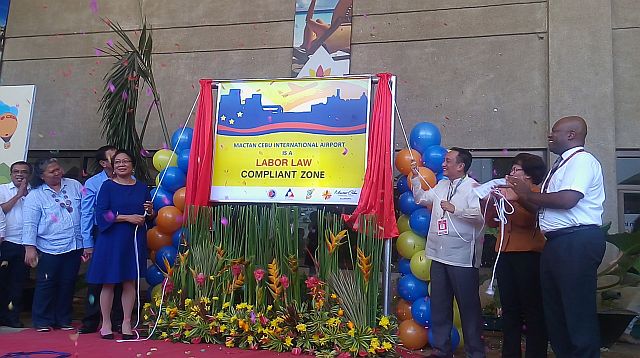 SET UP at the departure area of the Mactan Cebu International Airport (MCIA), this new marker will not be missed by passengers, serving as reminder that the airport management is not only after giving a world-class service to passengers, but is also after the welfare of its labor force.

Labor and Employment Secretary Rosalinda Dimapilis- Baldoz led the unveiling of the Labor Laws Compliance Marker at the MCIA on Wednesday, declaring the airport as a “Labor Law Compliant Zone.”

MCIA is the first airport nationwide that has complied with the country’s labor law standards, Baldoz said in her speech during the short program.

The commitment was signed by the MCIA management, the Department of Labor and Employment (DOLE) and the Lapu-Lapu City government.

“We commit to remain compliant to Labor Laws, most specially to wages and General Labor Standards, Occupational Safety and Health as we maintain to be child-labor free and compliant to all advocacies of DOLE,” read the commitment.

Baldoz said that being compliant to labor laws means that all the companies doing business at the airport follow all labor standards, especially on occupational safety and on wages.

Andrew Aquaah-Harrison, the chief executive advisor of GMR-Megawide, said their challenge is to ensure that each of the locator and concessionaire would remain complaint to labor laws.

“It’s so easy to start and it would be hard to keep it. But we are discussing how we can make this operational and maintain the compliance marker,” he said.

To maintain the compliance marker, MCIA has to pass the annual screening of DOLE. Those contractors found not compliant with labor laws will risk having their permit revoked by DOLE and MCIA.

“With this, we somehow hope to eradicate the poor employment practices some companies are engaged in from time to time,” said Harrison to reporters.

He said GMR-Megawide is now planning to set up a committee in conjunction with DOLE for an easier monitoring of the compliance of their locators.

MCIA general manager Nigel Paul Villarete said discussions to make the airport locators labor compliant began in 2010 and he is glad it materialized now. But he stressed the need for MCIA authorities to remain vigilant to ensure that the welfare of each airport worker, including the cleaners and those working in the baggage areas, would be looked after.