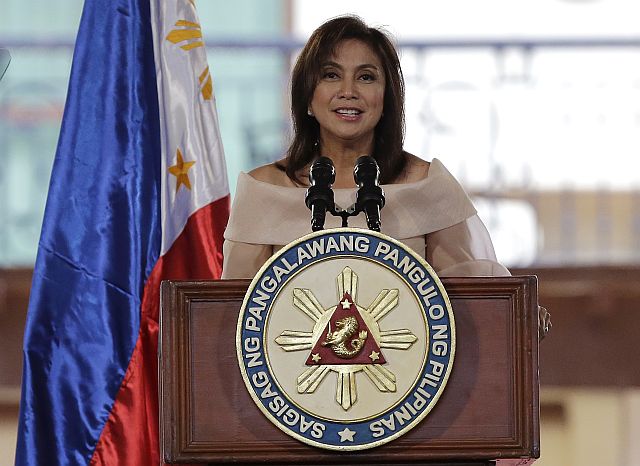 Manila — Leni Robredo sounded a rallying cry for national unity on Thursday as she took her oath of office as the 14th Vice President, becoming the second woman to rise as the second most powerful official of the Philippines.

“As Jesse used to say when he was alive: ‘What brings us together as a nation is far more powerful than what pulls us apart’,” she said, quoting her late husband, the former Interior Secretary Jesse Robredo.

“During these times of conflict, unity is most important for our nation. We may come from different walks of life or different advocacies, but our dreams are the same: that each Filipino will live a dignified, prosperous life,” the 51-year-old Robredo said.

Without the new President at her side, the new President-in-reserve was sworn into office under weeping skies, surrounded by people in the fringes of society whose interests she has vowed to protect — women, farmers, the urban poor, persons with disability, the Bangsamoro, indigenous peoples and the youth.

Kris Aquino, the celebrity sister of former President Benigno Aquino III, who relinquished his post to Rodrigo Duterte also Thursday, added star power to an otherwise simple ceremony, though she came in late.

But Robredo devoted much of her speech talking to and about the people in the margins of society and how she hoped to serve and address their needs.

“The doors of the Office of the Vice Presidency are always open, no matter one’s station is in life, beliefs or party. Ours will be a listening office,” the former Camarines Sur congresswoman said, speaking in Filipino.

“In our first 100 days, we plan to once again go to the farthest and the smallest barangays to pray with you, to laugh and cry with you and most of all to listen to the things that you want changed,” she said.

“We hope that as we bring the Office of the Vice Presidency to your barangay, you will feel the government is truly there for you, and when you feel that, you will be inspired to spark your own change as well,” she said.

Dressed in an ecru Filipiniana dress designed by Paul Cabral, Robredo had a mostly calm demeanor but visibly struggled to fight back tears during the first part of her speech when she talked about personal defining moments.

“There are moments in our lives that shine brighter than others, like when I met Jesse. Or when I saw my children’s faces for the first time. Or when the plane (of my husband, Jesse Robredo) crashed. We are facing one of those moments once again,” she said.