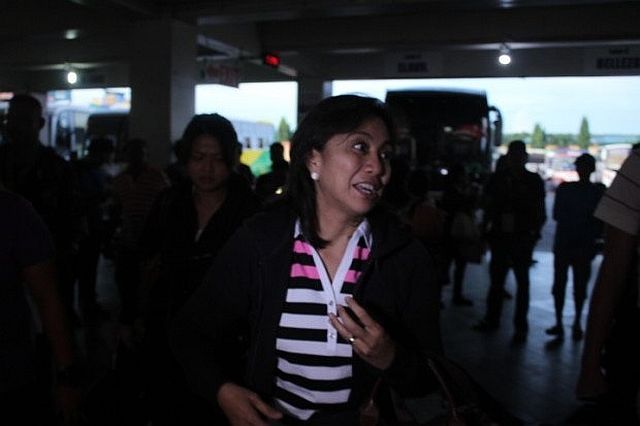 Robredo arrives at the Naga Central Bus Terminal, her first trip by bus after her inauguration as Vice President.

Robredo, with the entourage of staff and Presidential Security Group, arrived in the city via a commercial bus to attend an inauguration party.
Simply clad in denims, striped shirt under blue jacket, Robredo disembarked the aircon bus without flare even as local television crews’ cameras focused with anticipation of her arrival.

Robredo’s arrival did not create stir in the terminal while she walked towards the north end, stopping a bit to acknowledge people who called her “Vice President.”

She rode a dark blue car while the staff and PSG dispersed scrupulously to different vehicles as they convoy to a hotel in Magsaysay Avenue where she is billeted.

The vice president, meanwhile said a Cabinet post would be a bonus but said she was ready to work even without it.

President Rodrigo Duterte, whom she met for the first time on Friday, had said he did not feel compelled to give her a Cabinet post because he did not want to hurt the feelings of his friend, outgoing Senator Ferdinand “Bongbong” Marcos Jr., who lost to Robredo in the vice presidential race.

She said she would put up satellite offices aside from the Executive House in Quezon City, which is the vice president’s official residence.

“Pero mahahanapan naman iyan ng paraan. Ayoko naman kasing hintayin pa na magkaroon ng budget, na maraming umaasa sa tulong natin (But we will look for ways. I don’t want to wait for the budget while there are people expecting for our help),” she said.

Robredo said she would still ride public bus every time she goes home to Naga City.

“Actually kahit hindi ako nag-bus ganoon rin. Mayroon silang required na parang number ng kasama. So noong nalaman ko nga na ganoon rin, sabi ko baka mas mabuti pang mag-bus tuloy para mas tipid, (Even if I don’t take the bus, there is a required number of people to accompany me. So when I learned about it, I thought it would be better and cost-efficient if I continue to take the bus),” she said.

Read Next
20 hostages killed in Bangladesh