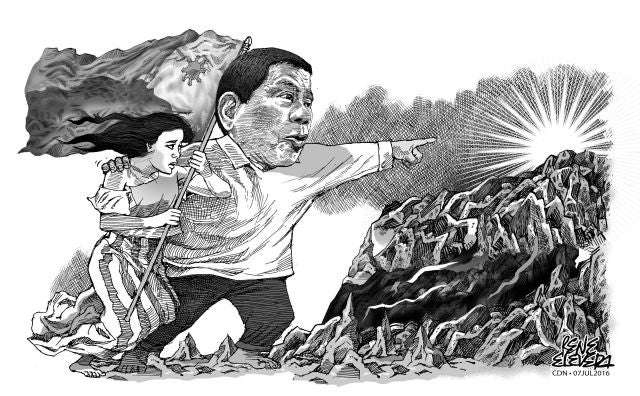 There were several talking points raised by President Rodrigo Duterte’s 15-minute speech, and we can only hope that the rest of his speeches are as short as the first one he gave as the country’s Chief Executive.

The overall theme of Duterte’s speech as encapsulated by the Philippine Daily Inquirer days ago was the warning that the country is in for a “rough journey ahead.”

Even before he issued the warning, Duterte had provided signs as he took on institutions like the Church — for discouraging Filipinos from voting for him — the media whom he told straightaway not to f(mess) with him and even the United Nations (UN) which he described as inutile for failing to stop civil wars and poverty in Africa as well as the Middle East dispute.

Though he promised to ease back on his cuss words — we don’t believe he can totally eliminate them from his vocabulary as one cannot teach an old dog new tricks — President Duterte’s speech wasn’t all fire and brimstone, though one cannot dismiss the tone of authority in his voice as he called on government agencies to cut down on red tape.

The “rough journey ahead” had to do with his take-no-prisoners campaign against crime which is expected to draw a lot of heat not only from Congress but also from rights groups, political critics and the Supreme Court whose Chief Justice Maria Leonor Sereno already questioned the appropriation of emergency powers to Duterte in addressing Manila’s traffic congestion.

His statement to Congress and the courts for them “to mind their own business” while he “minds his own,” while carrying some strong undertones, is prefaced by an assurance that as a former prosecutor, he knows by heart the limits of his authority as president. “I know what is legal and what is not,” Duterte reiterated.

In justifying his war on crime, which he acknowledged had been questioned by Congress and rights advocates, Duterte pointed to the devastation caused by the rampant use and distribution of drugs. “Look at it from this perspective, and tell me if I am wrong,” he said.

The President also hit at the heart of the problem which he said was creeping and cutting into the country’s moral fiber, and that is the erosion of faith and trust in the government, in its capacity and commitment to serve its people.

Which is why, speaking from experience as the longest serving mayor of Davao City, Duterte ordered all government agencies not only to remove unnecessary requirements but also to honor and be transparent in all government transactions and dealings without having to change the rules in the last minute.

Read Next
Locking horns with the beast