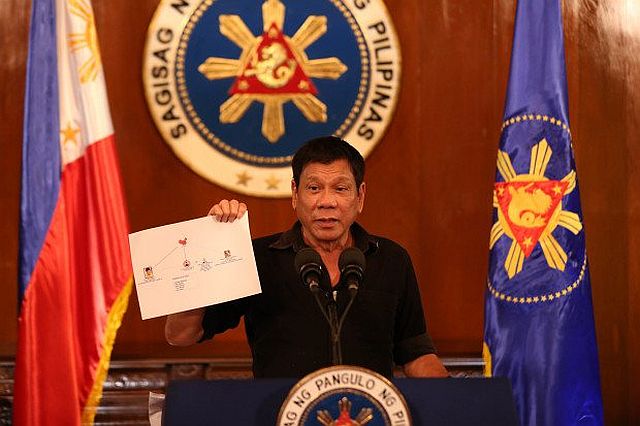 TRIAD CONNECTION: President Rodrigo R. Duterte shows a copy of a diagram illustrating the connection of high level drug syndicates operating in the country during a press conference at Malacañang on July 7, 2016. (KING RODRIGUEZ/Presidential Photographers Division)

Peter Lim, purported to be the controversial Cebuano businessman previously investigated for links with international drug syndicates, was yesterday identified as among the three big-time drug lords whom retired police general Marcelo Garbo was allegedly coddling.

Lim was listed as the head of the Visayas drug triad. The two other drugs lords were Wu Tuan, alias Peter Co; and Herbert Colangco, alias Ampang.

“There are five levels depending on capability of drug pushers to sell. Level five is top tier of drug hierarchy,” he added.

“According to information, Peter Lim is outside the country and the President has warned him that if he steps in NAIA (Ninoy Aquino International Airport), he will be killed,” Calida said.

In a televised press briefing aired on state-run network PTV-4, Duterte showed a chart of drug personalities, mayors and other individuals involved in the illegal drug trade.

Mr. Duterte said that “on the line of structure is Marcelino Garbo,” whom he described as coddler of drug syndicates. “Regarding Garbo, I think the DILG (Department of Interior and Local Government) should take care of him,” he said.

Co and Colangco are high profile inmates now behind bars at the New Bilibid Prison in Muntinlupa City. Co is reportedly the leader of the Bilibid 19, a group of drug convicts living a luxurious lifestyle inside the national penitentiary.

President Duterte warned Co and Colangco not to escape from prison because they would surely die.

Former Rep. Antonio Cuenco of Cebu City’s south district said Peter Lim and his brother Wellington were on the Philippine National Police’s (PNP) watchlist of the top drug personalities in the country since 1997.

“A Peter Lim was on my list that was provided by the Philippine National Police at that time. I don’t know if he’s the same Peter Lim alluded to by President Duterte,” he told Cebu Daily News in a phone interview last night.

Cuenco was the chairman of the House of Representatives’ committee on dangerous drugs who called for a House inquiry in 2001 over his Comprehensive Drugs Act bill.  The committee dropped a bombshell when it presented two witnesses — Bernard Liu and Ananias Dy — who accused the Lim brothers of being drug lords.

Liu and Dy worked at the Hilton Heavy Equipment owned by Peter and Wellington Lim.

In his testimony, Liu said he was privy to the illegal drug activities of the Lim brothers because he was brought to Hong Kong three times, between 1989 and 1996, to get supplies of shabu (methamphetamine hydrochloride).

Dy made a similar testimony, saying Peter Lim was engaged in drug trafficking and that it was easy for his former boss to operate because the latter had contacts with some Customs and Immigration officials.

But Cuenco said the Lim brothers were eventually cleared of the accusations.

“The National Bureau of Investigation failed to validate the information against the Lim brothers. We can’t establish any case for lack of evidence,” he said.

The Lim brothers later filed libel charges against Dy and Liu. Both were also charged for violating the Comprehensive Dangerous Drugs Act based on their admission in the congressional hearing that they once brought into the country a golf bag containing illegal drugs from Hong Kong. The court issued an arrest warrant for Liu and Dy but the two went into hiding.

In July 2006, however, Dy was shot dead by two unidentified men at the corner of Salvador and Katipunan Streets in Barangay Labangon, Cebu City.

In September 2011, Liu was found dead in his home in Naya Subdivision, Barangay Tangke, Talisay City, where he lived alone.  A rope around his neck and crude oil poured over his body were the telltale signs of a man whose life ended in violence. Liu’s body was already decomposing when police discovered the corpse at the back of his house.

Cuenco said he would welcome any investigation that would be conducted against Lim and the other drug lords.

Cuenco said he admires President Duterte’s campaign against illegal drugs but begged off from issuing any statement on the death of suspected drug lords and peddlers in Cebu City.

Cuenco was the primary author of Republic Act 9165 or the Comprehensive Dangerous Drugs Act of 2002 at the House of Representatives. He was joined by the late Senator Robert Barbers in passing the law now used in prosecuting those involved in illegal drugs./INQUIRER.NET