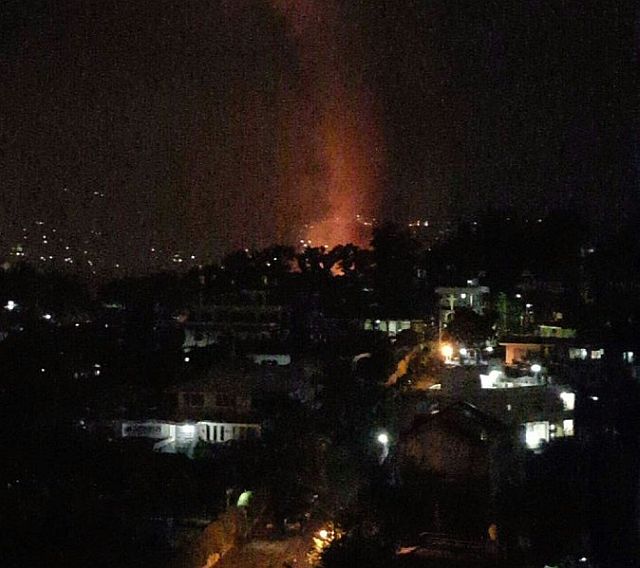 The fire reported at 6:46p.m. was placed under Task Force Alpha to mobilize firefighters from neighboring local governments. It took firefighters two hours before they put out the fire. (CONTRIBUTED PHOTO/VAUGHN LASTIMADO)

The absence of an access road hindered firefighters from immediately putting out an early evening fire that burned 50 houses in Barangay Capitol Site and Guadalupe in Cebu City on Tuesday.

The fire reported at 6:46p.m. was placed under Task Force Alpha to mobilize firefighters from neighboring local governments. It took firefighters two hours before they put out the fire.

Firefighters had to connect their hoses to reach the fire site located close to the Guadalupe riverbank. The area doesn’t have an access road and could only be reached by foot.

SFO3 Pier Angelo Abellana said the fire originated at the home of a certain Daisy Talaogon. A spark at on the main electric switch caused a fire that spread to neighboring homes made of light materials.

Scared of the spark, Talaogon told fire investigators that she immediately fled her home. Some structures built on the other side of the river, in Barangay Guadalupe, also caught fire.

Fire trucks occupied Villalon Drive located in front of the Barangay Hall and connected their hoses to reach the fire site that is located on a downhill portion of Barangay Capitol Site close to the Guadalupe River.

Vehicular traffic was diverted to the nearby Kalunsan road that access to Sitio Sudlon in Barangay Lahug.

Nagiel Bañacia, head of the city’s Disaster Risk Reduction Management Office, said they were still trying to account for the fire victims as of 9 p.m.