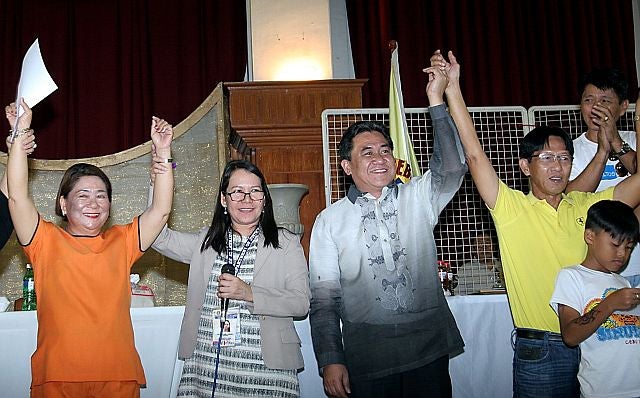 Provincial Prosecutor Jane Petralba proclaims Provincial Board Member Yoly Daan (left) at the Capitol Social Hall in this May 10, 2016 photo.

From working as an extra in radio dramas, it was only a matter of time before Yolanda “Yoly” Daan succeeded her husband, famed radio talent turned public official Julian “Teban” Daan, at the Provincial Board (PB).

When Teban became a PB member in 2007, he appointed her as chief of staff.

When he and Yoly won in the May 9 elections — he as Talisay City councilor and she as PB member — Yoly went to the Capitol with her own staff in tow.

Like her husband, Yoly Daan will represent Cebu’s 1st district in the PB which consists of the cities of Talisay, Naga and Carcar and the towns of Minglanilla, San Fernando and Sibonga.

“Ako lang pud gidawat. Ako lang gisuwayan. Iya sad ko giingnan nga ako’y mopuli niya kay ilado naman sad ko sa mga kapitan kay ako man ang tig-entertain nila sa office (I accepted his (Teban’s) offer. I tried it. He also told me that I should replace him since a lot of barangay captains know me since I’m the one who entertains them in the office),” Daan said.

Daan was on her third year of commerce and accountancy degree studies when she stopped and married her husband in 1969.

Their two children have both married while she and her husband live in their Talisay City home with their helper of over 30 years.

Daan recalled that when she campaigned in the district’s 130 barangays, she didn’t promise anything “grand or earth-shaking” to her constituents.

She only assured them that she will continue what her husband did. Upon assuming office, Yoly facilitated the release of cash assistance for barangays under the Legislative Assistance Fund and this had kept her busy in the past weeks.

The LAF for each PB member is P5 million and this would be divided into hard or infrastructure projects and soft or socio-cultural projects and programs. The 64-year-old Daan said the amount is not enough.

She said she intends to spend her first few months in the PB listening to her more experienced colleagues.

“That’s what Teban told me as well, that I should just listen for now since I’m a neophyte. At home, we would discuss about the session. I also ask for his help with the resolutions in the PB,” Daan said.

On serving his last term this year, he asked his wife to run for his old post.

Aside from her previous staff work, Daan is also active in church activities in their community in St. Joseph the Worker Parish in Talisay City.
Despite being a neophyte PB member, Daan was named as head of the committees on differently abled persons and on public affairs and information of the PB.

“I have plans but I still need to have them studied. I want to help the PWDs. I was told to ask for a budget from the national government,” she said.

Daan said she will ask the office of Sen. Juan Miguel Zubiri for help in acquiring a special ambulance for PWDs.

For the province’s founding anniversary this month, Daan said she prepared a script that will be performed by the PB.

Read Next
COA: No accounting, no cash aid for NGOs