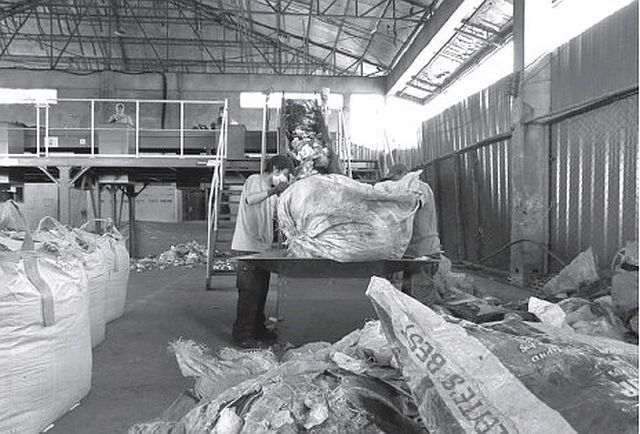 The Mansei recycling plant in Inayawan landfill in this February 2015 file photo.

INSIDE the Inayawan Sanitary Landfill is a facility that shreds plastic and converts it into fluff fuel to be sold to cement manufacturers.

Loloy, the 36-year-old plant operator, said the machine shreds plastic and other recyclables that are fed into it into very fine pieces.

“The machine will break down if there are other stuff aside from plastic being processed such as aluminum foils and especially metals,” Loloy said in Cebuano.

Loloy said converting plastic into a refuse-derived fuel (RDF) seems an easy task but it actually takes a lot of time, effort and extra caution.
The 10-meter tall shredding machine sits in the middle of the recycling plant, next to the segregation machine.

Hanging above the workers’ lockers was a chalkboard divided into two.

One side had the words “Good Plastic” written at the top portion with plastic cellophane, food wrappers and containers, and envelopes tacked to it.

The other side was for “Bad Plastic” and examples of these materials are plastic raincoats, plastic bags with cloths attached to them, and plastic vinyl records.

Before pouring them into the shredding machine, Loloy and three other workers will inspect if the plastic placed onto the segregating machine’s conveyor belt is pure plastic with no mixture of “foreign” materials.

After inspection, a sack placed at the end of the conveyor will catch all the segregated plastic.

The platform where the sack of garbage rests on will be raised to spill everything into the shredding machine. Loloy said they produce nearly 200 tons of RDF thrice a week.

They don’t operate daily and the facility is open only if private institutions like Unitop give their plastic refuse to the city government.

“There were 15 workers manning the machine and supervising the plant but now, there’s only five of us left. I’ve heard they were relieved by the city government last June 30,” Loloy said in Cebuano.

He said if no new employees arrive, work in Mansei will slowly become more strenuous. Their daily wage was also cut by P10 from P350 to P340.

“I know the P10 deduction is meager but it’s a huge blow to my family especially that my wife and I have three children, all of whom are still studying in elementary. My wife is a food vendor, and cooks meals day to night to earn income,” he explained in Cebuano.

Loloy said he wanted to remain working at Mansei especially since he lives just a couple of kilometers away from the site, and only walks to work.
Bidding of Mansei’s by-product just started two months ago after other companies visited the plant to buy at least 10 tons of shredded plastic.

“When we just started, only a few companies knew about us. They just came here and purchase at least 100 kilos of shredded plastic as RDF,” Loloy said./UP Cebu Intern Morexette Marie Eram

Read Next
‘Does City Hall have rehab, closure plans for landfill?’