Vendors cash in on IronMan 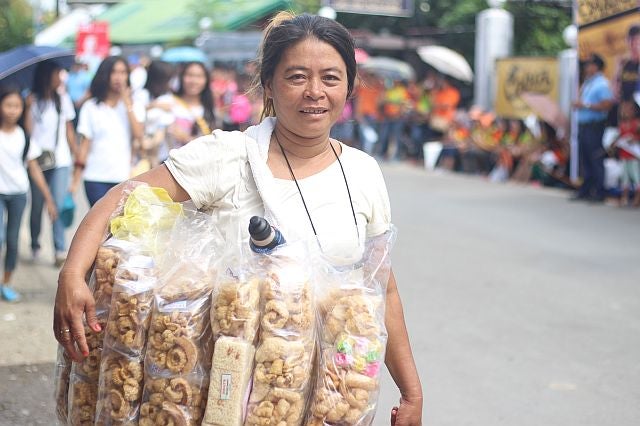 Abet Patalinghug sells her chicharon along the Cobra IronMan 70.3 route in Lapu-Lapu City.

BUSINESS was booming for the vendors selling their wares along the Cobra IronMan 70.3 Philippines Asia-Pacific Championship race route yesterday.

One of them was Abet Patalinghug, who sold her chicharon on the streets of Punta Engaño in Lapu-Lapu City.

The 46-year-old Patalinghug has been selling her Naga-made crispy pork rinds for three years now and sells them at P45 a pack or three-for-P100. She earns at least P500 every time an IronMan race is held.

She left home early from Sibonga to get to the running route in Lapu-Lapu and arrived just before the roads were closed Sunday dawn.

Just like Patalinghug, Jocelyn Dareche sells mineral water with her son CJ Niño tagging along. She is more than happy to earn extra whenever the IronMan weekend comes. The 42-year-old has been in the refreshment business since she was a teenager.

Annabele Bacong, 34, on the other hand, has been selling barbecue in the biggest triathlon race in Cebu for three years now. Most of her customers are the spectators waiting along the road.

Also selling refreshments during the race was Roda Dungog, who stationed herself along the road of the Mactan Newtown for customers to notice her mango-flavored gulaman and banana cue.
As the IronMan 70.3 race gets bigger and better every year, it wouldn’t be a surprise if more vendors try their luck selling during the prestigious race.