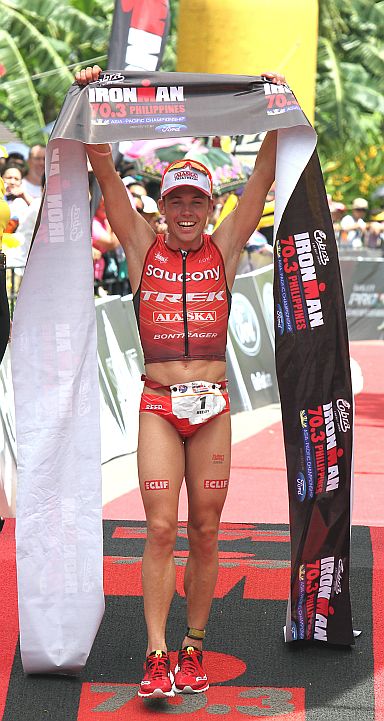 After getting rave reviews for its near perfect hosting of yesterday’s 2016 Cobra Ironman 70.3 Asia Pacific Championship, is the Philippines ready for the IronMan World event?

That is the collective belief of the sport’s top personalities including World Triathlon Corporation (WTC) CEO Geoff Meyer, Pro Elite winners Caroline Steffen of Switzerland and Tim Reed of Australia.

Meyer, who was here to oversee the conduct of the record-breaking race, describe it as the smoothest IronMan race he has ever witnessed.

“It was fantastic. It’s amazing to see the entire community engage and unite to send a message to the entire world that yes, the Cebuanos can set a standard for hosting this international event.”

Meyer said Cebu has a big chance to again host the IronMan Asia-Pacific Championships maybe in 2018 and even the World Championships.

“With its excellent hosting, the Philippines deserves to host the world championships,” Meyer declared.

Steffen, meanwhile, did not mince words in describing her “crazy” experience.

“Definitely. That’s no question. It’s well-organized and why not? Why not have a world championships here?” the four-time Cobra IronMan Philippines winner said.

Steffen said that what surprised her the most was how organizers outdid themselves this year. She added that she considers last year’s race in Cebu as one of her favorites and did not expect it to be surpassed in just 12 months.

“Last year was terrific and I was like, how can they make it even better because it’s absolutely crazy out there today. I tell you, guys, it was mad and I really feel safe to have like roads closed,” she said. “The supporters are crazy and so many people yelled my name. I really appreciate it.”

Sunrise Events Inc. (SEI) Chairman Wilfred Uytengsu said that he is leaving the door open for the possibility of Cebu hosting an IronMan World Championships.

“Anything is possible. That’s actually the slogan of IronMan. In terms of hosting a world championship, I hope we’d improve on the level of competency, the quality of the event and we’ll have to see. I’ll keep that door open,” Uytengsu said.

“The first time I was here, I was in shock. There’s no other race in the world that I’ve raced that has this sort of atmosphere. I respond really well to the friendly crowd,” Reed mused. “It’s a very special feeling to have that kind of support from the people.”
Cebu’s fifth hosting of the Cobra IronMan 70.3 has surpassed so many records. First, it drew a record field of 2,967 triathletes, has the most number of Pro Elite contenders at 33 and rocked the triathlon world last October when its slots were all sold out in just 28 minutes, which was also a record.

Yesterday, the triathletes opened their quest for the $75,000 prize at 6:30 a.m. amid downcast skies and windy conditions which soon became warmer as the day progressed.
By 12 noon, the 1.9-kilometer swim, 90k bike and 21k run event was over. It was, according to SEI Manager Princess Galura, the fastest finish of the race in her eight years of organizing the event.

Galura likewise thanked the Cebuanos especially the mayors of the four cities covered by the race and the more than 5,000 volunteers for their overwhelming support.

Read Next
Vendors cash in on IronMan