Rama’s family and allies say he is innocent 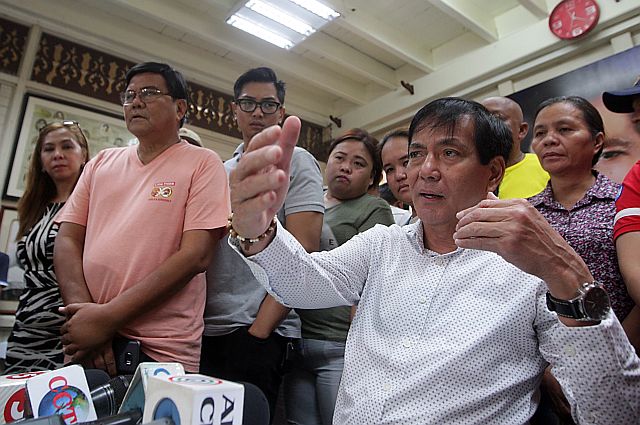 Former Cebu City Mayor Michael Rama is accompanied by supporters during a press conference where he vehemently denied being involved in illegal drugs after his name was included in President Duterte’s list of illegal drug protectors. (CDN PHOTO/TONEE DESPOJO)

POLITICAL allies and family members of beleaguered former Cebu City Mayor Michael Rama came in droves to his family’s ancestral home in Barangay Basak San Nicolas before dawn Sunday to stand by him against what they said where baseless accusations.

Acting Cebu City Mayor Edgar Labella and Rama’s running mate in the May 2016 elections, one of the first to arrive at the Rama home, dispelled rumors that the former mayor did not do anything to solve the proliferation of illegal drugs in the city.

“I am shocked and could not believe the news. I am deeply saddened. I have known Mayor Mike Rama and his family as God-fearing, God-loving and law-abiding citizens,” Labella said in the press conference at the former’s mayor residence.

He said the list of illegal drug protectors that included Rama appeared to have been “just a list that was given to the President” and could have come from anyone.

Labella echoed Rama’s call to see the document where his name was included so they could properly defend the former mayor’s case.

Rama’s allies from the different barangays also spent their Sunday with him as a gesture of unity and support, said Tabunan Barangay Captain Lucresia Gabato.

“I was shocked when they told me that he was included in the list of drug protectors because I know the mayor as a good man,” said Gabato.

Zafra led the city’s barangay captains in signing a pledge of cooperation to support police campaigns against illegal drugs.

Zafra said their opponents might use this news as a black propaganda in the coming barangay elections but he was confident their constituents knew them better and would continue to support them.

Rama’s son Mikel said he was hurt when he learned about the President’s pronouncement but considered it as “another challenge for us in the family.”

“Sakit pero wa mi mahadlok. (It is painful but we are not afraid). As they said: ‘No good deed goes unpunished.’ We are not afraid because we know the truth,” said Mikel who is part of his father’s team of lawyers.

His sister, Manila-based Micheline shared his father’s official statement on Facebook with a hashtag #NoDueProcess.

In a Facebook post, Jaja Chiongbian-Rama, wife of Cebu City Councilor Edu Rama, a nephew of the former mayor, said she was shocked and disheartened by the news.

“It is frankly disgusting at how a truly innocent person can be unjustly and unfairly accused of something he is NOT, and that I can say with all conviction from knowing Tito Mike’s character and the values and beliefs he upholds,” Chiongbian-Rama said.

Read Next
‘Best race ever’