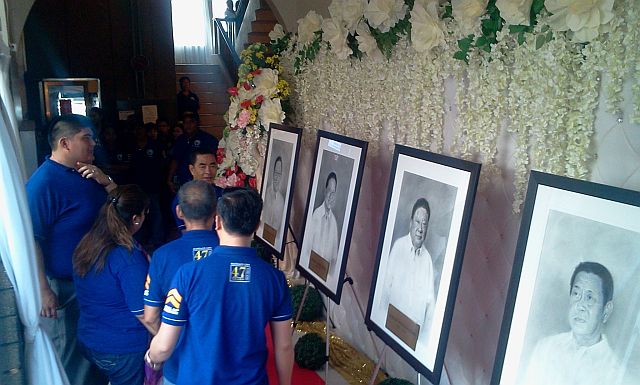 Families and relatives unveil the charcoal portraits of the past six mayors since Mandaue became a city. (CDN PHOTO/NORMAN MENDOZA)

The Mandaue City government started its 47th Charter Day celebration with a Mass at the National Shrine of St. Joseph at 6:30 a.m. yesterday that was joined by all government employees led by Mayor Gabriel Luis “Luigi” Quisumbing.

It was followed by a foot parade that lasted for almost two hours passing through SB Cabahug Street, AC Cortes Avenue, DM Cortes Street and back to City Hall.

All public elementary and high school teachers and all barangay workers also joined the activity.

Yesterday’s program highlighted the unveiling of the charcoal portraits of the past six mayors since Mandaue became a city.

The families of the past mayors themselves unveiled the portraits placed in an elegantly decorated portion of the City Hall with red carpet.

It was during the incumbency of Demetrio Cortes Sr. when Mandaue became a city. Cortes served two full terms as mayor and brought remarkable developments in the city.

He was followed by Vicente “Tingting” dela Cerna, who was appointed as OIC by the late former president Corazon Aquino; Mayor Restituto Soon, who contributed mostly health projects; Mayor Alfredo “Pedong” Ouano, who was remembered for the creation of the Mandaue Reclamation Area; Thadeo “Teddy” Ouano, who succeeded his father Pedong; and Jonas Cortes, now a sixth district representative.

The Ouanos, except for Lolypop Ouano-Dizon, Quisumbing’s rival in the last mayoral election, and Dela Cerna’s two daughters, who are both lawyers, also joined the event.

Mayor Luigi Quisumbing, in his speech, said it is now time to forget political rivalry and work together for a progressive Mandaue City.

“It is rightful to acknowledge the past mayors for their noble contributions to the city. I believe this is also a way of uniting Mandauehanons,” said Quisumbing.

He added that there were a lot of developments under the leadership of the past six mayors that every Mandauehanon has enjoyed.

“In the last few years, we’ve seen a very deep political rivalry that divided the Mandauehanons. Unfortunately we tend to forget our shared history that makes us united as Mandauehanons,” said Quisumbing.