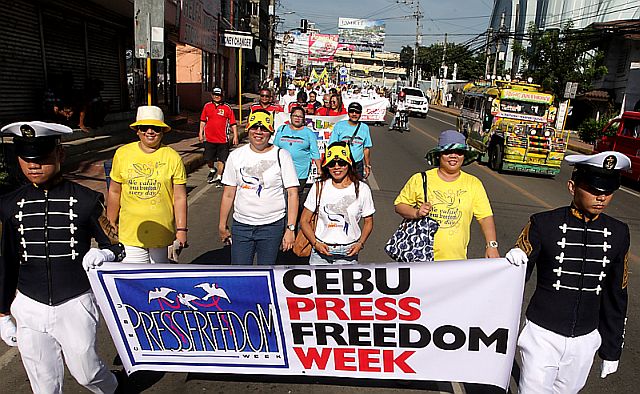 This was the challenge posed by Fr. Roberto “Bobby” Ebisa, SVD to journalists at the start of the 22nd Cebu Press Freedom Week yesterday.

“As media practitioners, let us try to examine what our blueprint is. Whom do we really serve?” he addressed fellow journalists during the Mass at the University of San Carlos North Campus gymnasium along General Maxilom Avenue in Cebu City.

“We all need blueprints. It guides us in everything we do. As journalists, we should go back to the truth, and truth is another name for God. Hence, our blueprint as media practitioners is God,” he added.

“But we have to make certain sacrifices as media practitioners if we want to adhere to the truth. As the saying goes, ‘ang mag-antos maoy masantos’ (only those who suffer will become saints.) And so let’s go back to our blueprint,” he said.

Ebisa presided over the Mass held after the parade participated by some 800 media practitioners from Cebu’s print, broadcast, and new media outlets.

The annual Freedom Walk started past 6 a.m. under fair skies at the Cebu Capitol and passed through a stretch of Osmeña Boulevard and General Maxilom Avenue.

In the opening program, raffle prizes and a contest of dance troupe performances from Cebu Daily News, The Freeman, Sun.Star Daily Cebu, and the Kapisanan ng mga Brodkaster ng Pilipinas was done.

Cebu Press Freedom Week coincides with the anniversary of the Martial Law declared by deposed president Ferdinand Marcos on Sept. 21, 1972.

The historic day serves as a reminder of the need to defend press freedom so to have a true democracy, a liberty that was curtailed during the Marcos era.