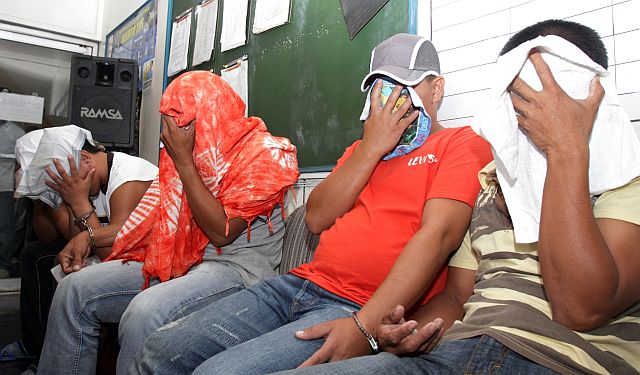 In a media interview, the fugitive Jaguar sent word that he was willing to “cooperate” with the new Duterte administration as soon as it started; and even spilled the beans in the illegal drugs trade as he already wanted to live a drug-free life.

But the so-called long arm of the law caught up with Jaguar as Cebu-based police operatives beat him to the draw in Las Piñas, Metro Manila.

In an alleged shootout with policemen, Jaguar was killed last June 17 before he could even surrender.

Last Saturday, in the town of Matnog, Sorsogon, Jaguar’s cousin and closest associate, Reynaldo “Jumbo” Diaz, was arrested by police.

But unlike Jaguar, Jumbo’s arrest came peacefully; and he is alive.

He was reportedly with six personnel of the Department of Justice (DOJ) at the time of his arrest, which baffled the Philippine National Police (PNP) for a while.

Until a clarification came from no less than DOJ Secretary Vitaliano Aguirre II.

Before Aguirre issued the clarification yesterday, earlier last Sunday Jumbo was presented to PNP Director General Ronald “Bato” Dela Rosa who was in Bicol for the feast of Our Lady of Peñafrancia in Naga City.

Dela Rosa asked Jumbo why he did not surrender even when the government appealed to drug personalities to yield to authorities.

After all, as far as police reports were concerned, Jumbo had taken over the operations of his cousin, Jaguar, since the latter’s death last June.

Chief Supt. Noli Taliño, director of the Police Regional Office in Central Visayas (PRO-7), considered Jumbo to be the second most wanted drug personality in the region before Sorsogon police swooped down on his hideout in Subic Saday Resort, Barangay Calintaan Matnog.

“I’m glad he was arrested. We’ve been aiming for him but he moved out of Central Visayas because he knew he was one of our top targets,” Taliño said of Jumbo, who faces charges for frustrated murder in the province of Nueva Ecija, as well as warrants of arrest for violation of Republic Act 9165 or the Comprehensive Dangerous Drugs Act of 2002.

But what happens if the “high-value target” arrested by police on the strength of several warrants turns out to be a state witness with rights protected under DOJ’s Witness Protection Program (WPP)?

Aguirre said Jumbo, Central Visayas’ second most wanted high value target, has been with the WPP all along.

According to Aguirre, the heir-apparent of drug kingpin, Jaguar Diaz, had executed an affidavit linking high-ranking government officials and former police officials to illegal drug operations.

“Reynaldo Diaz is the number two man of Jaguar who has been under our custody in the WPP after he executed an affidavit where he named the officials and police generals who received drug money from him every two weeks,” Aguirre said.

“He asked permission from WPP to attend a sort of reunion with his relatives in Bicol. But on his way there, he was arrested by police,” Aguirre explained at a press conference yesterday.

Jumbo can also provide information against government officials and policemen who are into illegal drugs, Dela Rosa further said, before being told of Jumbo’s status under the WPP.

Prosecutor Llena Ipong-Avila, head of DOJ’s Witness Protection Program in Central Visayas, said a person can become a state witness as long as he or she is not the most guilty.

“It all depends on the evaluation to be conducted by DOJ officials,” she told Cebu Daily News when to asked to comment on Jumbo’s case.

Jumbo is now under the protective custody of the DOJ central office in Manila.

“Let’s just wait for whatever information the chief PNP will relay to us,” Taliño told reporters.

Meanwhile, Yogi Filemon Ruiz, director of the Philippine Drug Enforcement Agency in Central Visayas (PDEA-7), said he will send agents to Bicol within the week to interview Jumbo.

“We’re hoping he can tell us something that would help in our investigations. We’re concerned because Jumbo is operating in Central Visayas,” Ruiz said in an interview.

Read Next
War of wills