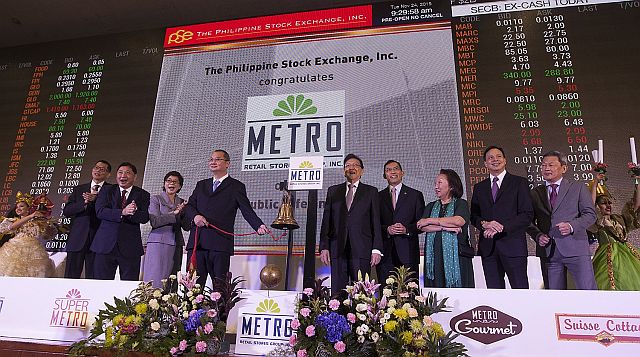 The officials of the Metro Retail Group led by its chairman Frank Gaisano (4th from left) ring the bell marking the listing of the Metro group in the Philippine Stock Exchange last November.
(CDN FILE PHOTO)

Be like the Visayas-based Metro Retail Group and have your firms listed in the Philippine Stock Exchange (PSE).

Lawyer Roel Refran, PSE chief operations officer, made this call to small and medium enterprises (SMEs) entrepreneurs especially those, whose businesses are in the Visayas.

Refran also showed the benefits of listing their small and medium companies in the PSE by citing the Metro Retail Group and how it grew when the firm went public.

The Metro Retail Group, which had been worth around P3 billion before listing in the PSE, was worth four times that when it opened at the PSE and had grown six times its value since then, said Refran during last week’s Visayas Area Business Conference in Ormoc City, which was attended by at least 500 business leaders in the Visayas.

He said that having a company listed at the PSE was not only confined to the “big boys” or large firms and that listing would allow companies to take advantage of the benefits of better governance brought by higher levels of company disclosures.

“You have a vision, but you need professional help. That is a very good reason why you would want to potentially list (your company),” he said.

He said this would mean that in every company’s board of directors, there would be “outsiders” representing stakeholders.

When the founders of a company would eventually retire, they would have to pass on the business to the next generation.

The company’s vision would also to be passed on, but there would be a need for professionalism of management for a firm to upgrade to the next level.

Refran cited not having one’s books in order as one of the greatest obstacles firms had been facing.

Before listing, he said companies would be required to clean up their books before going into the stock market.

“That is the only way we feel for you to ultimately extract the most out of your company, and the prospects available,” Refran said.

Among the requirements for listing are audited financial statements in the last three years and a good track record, said Refran.

Other advantages of having a company listed in the PSE are access to capital, enhanced valuation, and employee retention.

“When you are (listed) your shares are actually bigger than currency or money. If you want to acquire other businesses, you don’t have to spend for it,” Refran said.

He said SMEs can grow through acquisition via share swapping or an exchange of interests between companies.

By listing, Refran said, business owners would get to find out how much their companies would be really worth.

He said there had been companies worth three to four times their actual value and business owners did not even know it.

“People who want to invest (in their companies) actually give them higher premium,” he said.

Refran emphasized that the benefits of listing would also demand credibility, responsibility, and awareness from company owners.

He said owners would need to maintain good governance as well as compliance to disclosure requirements.

“At the end of the day, those requirements are there to ensure that the public interest is upheld,” he said.