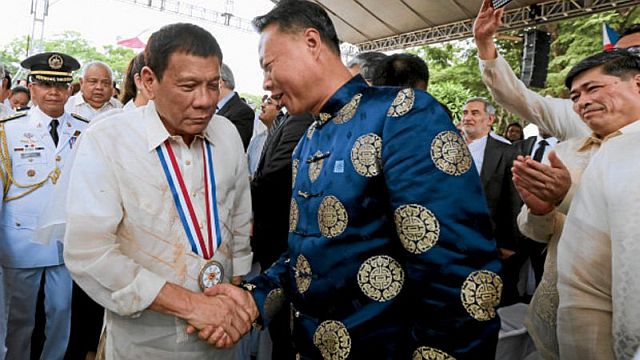 President Rodrigo Duterte welcomes Ambassador to the Philippines Zhao Jianhua during the celebration of the National Heroes’ Day in this August 29 photo.
(PPD FILE)

Cebu business leaders welcomed the government’s initiative to “recalibrate” its foreign policy toward fostering stronger ties with China and Russia, but they stressed the need to also maintain ties with traditional partners.

Federico Escalona, executive director of the Philippine Exporters Confederation, Inc. (Philexport) in Cebu, said that this is a good move since there is a need to trade with new markets such as Russia and increase trade with China.

“Of course, we should continue good trade relations with our traditional partners like the USA, Japan, and the European Union,” Escalona told Cebu Daily News.

He said China and Russia are two huge markets, so any movement in the Philippines’ foreign policy directed to these ties would not be a “zero sum game” but a “win-win situation.”

Cebu Chamber of Commerce and Industry (CCCI) president Melanie Ng, on other hand, said it is always good to explore new trade opportunities with markets that will increase the country’s economic gains.

“I would say that this would give a chance for our business sector to broaden their horizons to the possibility of engaging untapped markets,” Ng said.

In an Inquirer report, Finance Secretary Carlos Dominguez III was quoted as saying that the “recalibrated” foreign policy of the administration would open the country to other markets.

He said that with this recalibration, the country’s agriculture sector is seen to benefit as the Philippines looks at new export destinations such as Russia.

He said the federation might become a new destination for Philippine bananas, among other tropical fruits and vegetables.

Glenn Soco, president of the Mandaue Chamber of Commerce and Industry (MCCI), said he sees opportunities in establishing closer trade links with China and Russia.

Soco said the MCCI has sister relations with business chambers in the Russian cities of Vladivostok and St. Petersburg, adding that Russia is a potential market for local furniture, garments, and handicrafts.

“They can also be our partners in the academe, engineering, tourism, and agriculture,” he said.

Soco said trade with China had always been strong because of proximity and close cultural ties.

But while forging stronger alliances with non-traditional partners, he said the administration should not “burn bridges” with existing allies.

President Duterte earlier announced that he would start building “new alliances” with China and Russia by next year to cushion the fallout from the possible withdrawal of the United States from the Philippines.

The US is among the Philippines’ top trading partners and traditionally has been the country’s largest foreign investor. Trade in goods and services with the Philippines amounted to $24 billion, broken down to $10.6 billion in exports and $13.3 billion in imports.

Meanwhile, the President has also criticized members of the EU for calling him out over his bloody campaign against drugs.

“The country should adopt a universal and diplomatic approach in our foreign relations for our country to be more globally competitive,” Soco said.

Read Next
Maestro Jose Valdez and his music