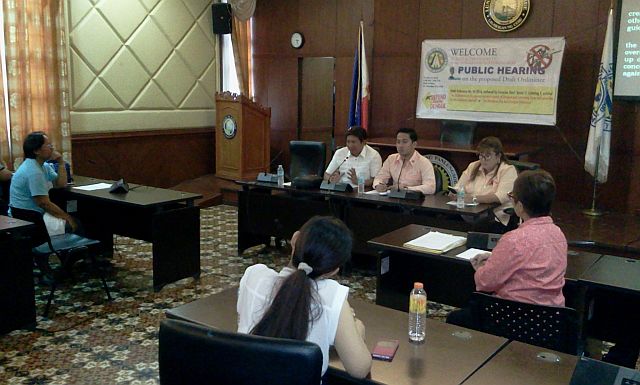 OWNERS, administrators and caretakers of households, abandoned houses, and business establishments in Mandaue City will be required to get rid of mosquito breeding grounds or they will be fined.

That is if the city’s proposed anti-dengue ordinance, which was sponsored by Councilor Raul Cabahug V, will become a city law.

The Mandaue City Council committee led by Councilor Nilo Seno held a public hearing on the proposed ordinance, which was passed on first reading.

The anti-dengue draft ordinance addresses all owners, managers, administrators, and/or caretakers of households, schools, vacant lots, abandoned houses, tire trading/merchandiser business, and all other business establishments within Mandaue City to get rid of mosquito breeding grounds, particularly stagnant water, to avoid mosquito larvae, or they will be penalized.

The proposed ordinance states that buildings or structures under construction must not accumulate stagnant water and solid wastes.

Water drums, pails, and similar containers must be covered at all times.

Old and discarded tires should be punctured or cut.

Unused tin cans, jars, bottles, pots, and the like should be properly collected, stored or disposed of. Gutters of roof must be maintained free from accumulation of rain water.

Abandoned swimming pools must be treated with larvaecide or other means of controlling the vectors.

Seno said that a task force created by the City Health Department would be tasked to monitor and issue citation tickets to violators.

The task force will be composed of barangay-based deputized agents.

“We will also summon those who refuse to have their fenced or private properties inspected by the task force and file a case against them,” said Seno.

The City Health Department and the barangays will also be tasked to conduct massive public awareness campaigns on the anti-dengue drive and the proposed ordinance if approved.

Penalties for the violators will be a warning and community service of three hours in the area suggested by the City Health Department.

Read Next
Police dragnet results to arrest of 7 drug suspects