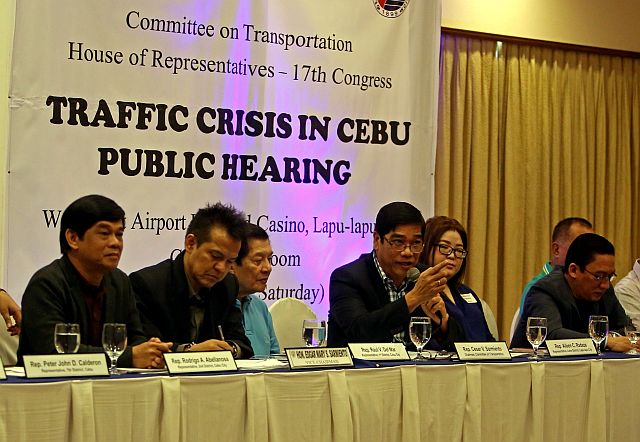 Cebu City officials are looking forward to Congress granting emergency power to President Rodrigo Duterte to solve the traffic problems in Metro Manila and other areas in the country like Metro Cebu.

But Rafael Yap, Cebu City Transportation Office (CCTO) chief, said it’s important that local government units (LGUs) be made part of the steps to be undertaken by the administration once it gets its powers.

“We’re looking forward to the granting of emergency powers. But for us, since traffic is mostly tied to development, LGUs should be made part of the solution,” Yap told CDN in an interview yesterday.

He said that they would have to wait for specifics on the framework of the law that would grant the President the emergency power to know how exactly the LGUs like Cebu City could be actively involved.

“We’re looking forward to that (granting of emergency power). I believe it may be the answer to our traffic crisis,” Garganera said.

He also agreed with the Catanduanes Rep. and House Committee on Transportation chairman Cesar Sarmiento’s statement to raise the need to establish a body to govern traffic in Metro Cebu, which is similar to the Metro Manila Development Authority (MMDA).

Garganera said that this would solve the problem of different levels of implementa on of traffic rules and regulations in Metro Cebu.

He cited as an example people riding motorcycles who wear helmets within Cebu City but they would take these off when they reach Talisay City.

Both Yap and Garganera were present during the public hearing at the Waterfont Airport Hotel and Casino Mactan in Lapu-Lapu City.

During the public hearing, Presidential Assistant for the Visayas Michael Dino also proposed the creation of a P170 million traffic master plan for Cebu although there is still no budget for it.

Dino also suggested that Cebu adopt a Light Railway Transit (LRT) system with both elevated and subway components to bring people from the north and south to Metro Cebu and vice versa.

He said there had been already talks with Singaporean and Chinese groups for the possibility of having an LRT in Cebu.

Meanwhile, Cebu City Mayor Tomas Osmeña said that as long as the national government would not affect ongoing projects in Cebu like the Bus Rapid Transit (BRT) project, he would have no problem with the granting of emergency power to President Duterte.

“As long as they don’t block the BRT project in progress. Let them try to get the LRT project approved,” Osmeña told CDN.

For his part, Yap said the Cebu BRT project and a possible LRT system can coexist.

“We have no problem with the LRT proposal as long as it can hurdle the government scrutiny for projects. These can work side by side with BRT,” Yap said.

Yap also said he agreed with having a master plan for Metro Cebu traffic.

He, however, said that unlike previous master plans, this one should actually lead to the implementation of projects and programs and should not just remain as a study.