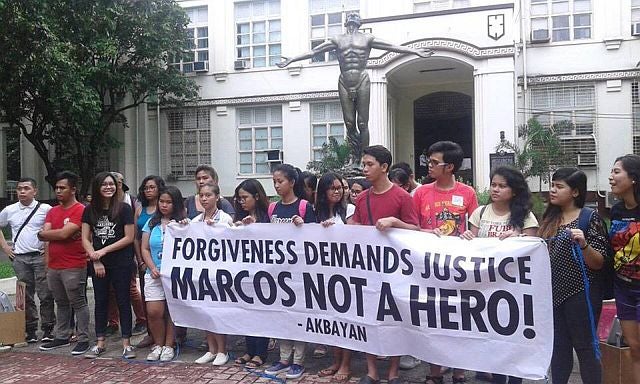 Students of the University of the Philippines College Cebu (UPCC) gathered in front of the UP Cebu Oblation Square, yesterday, to protest the burial of former president Ferdinand Marcos in the Libingan ng mga Bayani. (CDN PHOTO/MOREXETTE ERRAM

Students in Cebu gathered at the University of the Philippines – Cebu Oblation Square reiterating their call to the Supreme Court to stop the burial of former president Ferdinand Marcos at the Libingan ng mga Bayani.

The SC yesterday issued a statement that it decided to extend the Status Quo Ante on the issue of Marcos’ burial at the LNMB to November 8. This is the second extension of the SQA, temporarily stopping the late dictator’s burial at the LNMB.

“We welcome SCs decision on the Status Quo Anti Order to extend the decision making to November 8, especially that our petitioners would want to weigh in the manifestations that the Marcos family might have contributed to the campaign of President Rodrigo Duterte,” said Justin Balane of Akbayan Youth Cebu, who spearheaded the student-oriented mobilization rally.

But former senator Ferdinand Marcos yesterday maintained that his family only gave political support to President Rodrigo Duterte when he ran in the May 2016 national elections, denying reports that his sister Imee Marcos was a campaign donor.

The younger Marcos, who lost to Leni Robredo in the vice presidential race, said that “it is a natural part of the campaign. I don’t think it is unusual in any way,”

He arrived at the Supreme Court to thank supporters of his family who staged an overnight vigil as they waited for a decision.

Meanwhile Balane told reporters that the Cebu Citizens Assembly on Anti – Marcos, Akbayan and other non-governmental organizations (NGOs) against Marcos and Martial Law will also organize a city-wide rally, calling on the national government to stop the burial this November 8.

“We’re still planning the rally but it will be definitely a city-wide,” he added.

Senior political science of UP Cebu, Imee Espina, chairperson of Akbayan Youth – UP Cebu, said the reasons cited by Imee Marcos in her apology statement cannot justify the horrors and sacrifices the martyrs, heroes and victims of Martial Law and ultimately – the Marcos administration.

“And all the liabilities the Marcoses are facing now should not be buried. Forgiveness demands justice,” she stated in Cebuano.

Read Next
Elevator accident due to mechanical failure