ALERT UP FOR LAWIN 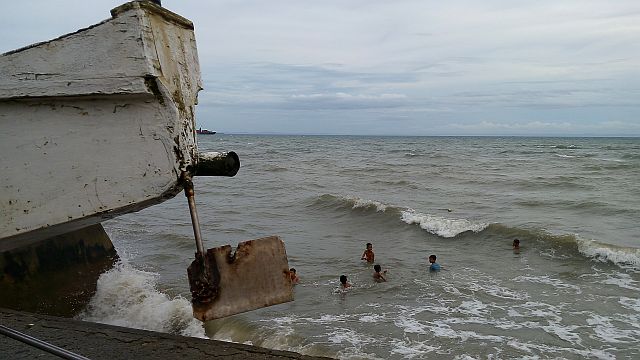 THESE fishermen from Sitio Litmon, Barangay Dumlog, Talisay City decide to take their fishing boat to safety, just in case, even if Cebu is not in the path of Super Typhoon Lawin. Cebu will still experience rough seas as TS Lawin enhances the habagat now affecting the province (CDN PHOTO/TONEE DESPOJO).

Although Cebu is not in the path of Super Typhoon “Lawin” (international name: Haima), local disaster and law enforcement authorities yesterday geared up for an intense weather disturbance that was bearing down fast on Northern and Central Luzon as of last night.

Even if Lawin has no direct effect on Cebu, a Philippine Atmospheric Geophysical and Astronomical Services Administration (Pagasa) official said that Cebuanos should still be cautious because the super typhoon will intensify the “habagat” (southwest monsoon) that is now affecting Cebu province.

Pagasa Visayas director Oscar Tabada said wind velocity of at least 40 kilometers per hour (kph) and light to moderate rains will be experienced in Cebu starting late on Wednesday afternoon.

Seawaters will also be unsafe for travel especially for small fishing vessels.

“Angay gyud ta nga magmatngon. Dili ron maayo nga magpalawod ang atong mga mananagat (We have to be careful. It is not a good time for fishermen to fish),” he said.

As of 8 p.m. yesterday, Pagasa said that the super typhoon was 175 km east northeast of Casiguran, Aurora, packing a maximum sustained winds of up to 225 kph near the center and gustiness of up to 315 kph.

Tabada said Lawin is now at almost the same level as Super Typhoon Yoland which packed a sustained wind of up to 315 kph when it hit Eastern, Central and Western Visayas areas on Nov. 8, 2013, leaving nearly 10,000 people dead and devastated whole towns and cities across central Philippines.

According to Tabada, Lawin could be more destructive since unlike Yolanda, this super typhoon would bring more rains along its path.

Tabada said Yolanda traveled at a speed of 39 kph while Lawin is expected to be slower at 25 kph. Lawin also has a bigger reach of 800 kilometers in diameter.

“Kung hinay ang bagyo, mas mobubo na siya og daghan nga uwan. Expected nga mas dako ang iyang damage (If a typhoon is slow moving, it is expected to bring with it more rains. It is expected to cause more damage),” he added.

Pagasa, in its 8 p.m. bulletin, said Lawin was expected to make landfall over Cagayan–Isabela area late last night (11 p.m.) up to early today ( 2 a.m.) before it will cross Apayao and Ilocos Norte.

Heavy to moderate rain was expected within the 800-km diameter of the super typhoon.

Tabada yesterday asked local government units (LGUs) in Cebu to especially monitor possible rise in water levels in their respective areas that might result from the rains expected to be experience on the island today.

But even if the super typhoon’s radius is about 400 km and its diameter is about 800 km, Al Quiblat, Pagasa Mactan’s chief meteorologist, explained that Lawin’s diameter would only cover the entire Northern and Central Luzon areas.

He said the Visayas area is around 900 km away from Northern and Central Luzon, which means that the outermost part of the 400-km radius of Lawin would still be too far from the Visayas area.

“The Visayas area is located still around 500 kilometers away from the outermost coverage of Super Typhoon Lawin. This means we won’t be affected by the rains and the strong winds and that’s why we don’t have storm signals in the Visayas,” Quiblat said.

But since Lawin will enhance the habagat, Quiblat said Pagasa still issued a gale warning in Eastern Visayas.

Coast Guard Cebu Commander Agapito Bibat said that in the absence of any gale warning or typhoon signal in the Visayas, the decision to cancel trips would be left to the discretion of the ship captains.

So far, however, 11 inter-island passenger vessels canceled their trips yesterday, as well as three cargo vessels bound for Metro Manila and Catanduanes.

The cargo-passenger vessels that canceled their trips were those bound for the neighboring islands of Bohol, Leyte, Masbate, San Carlos City and to Bantayan Island.

On the other hand, Bibat urged fisherman to refrain from going out to sea while the super typhoon is still wrecking havoc in the country as the unpredictable waves could be dangerous for small boats to sail.

As part of their preparations for the super typhoon, Bibat said that their response teams were placed on on-call 24/7 and are on heightened alert status, which means that they are ready to respond anytime.

“We need to look at our capability and capacity to respond to disasters. For now, I can say that we are ready,” he told reporters.

Doria said at least a hundred policemen and volunteers are on standby for humanitarian assistance and disaster response.

He said they are closely coordinating with the Cebu City Disaster Risk Reduction Management Office (CCDRRMO) while anticipating the super typhoon.

Chief Supt. Noli Taliño, director of the Police Regional Office in Central Visayas (PRO-7), also inspected all the disaster and rescue equipment at the Sugbo Grounds located at the South Road Properties yesterday.

“The time when typhoons visit our country has come. Our policemen should be ready,” he said.

Taliño said the Philippine National Police (PNP) and the LGUs should complement each other to have an effective disaster response operations.

“The PNP has limited equipment and so we lean on the LGUs. The police nonetheless can provide manpower. We just have to complement each other,” he said.

Cebu City Councilor Dave Tumulak, meanwhile, asked barangay officials and the people to be ready for the super typhoon.

While there was nothing much to worry in Cebu City, Tumulak said everyone should pray especially for people living in the northern part of the country on the path of the super typhoon.

“Let us pray for our brothers and sister in Northern Luzon,” he said.

He said Capitol also has about P70 million under PDRRMO, P9 million of which was allotted as Quick Response Fund (QRF).

Mayor Erwin Yu of Tudela town on Camotes Islands, told Cebu Daily News that their town, which was devastated by Super Typhoon Yolanda, has been on alert status since Tuesday and closely monitoring the movement of Lawin.

Read Next
Kandaya Resort gets a big slice of foreign tourists