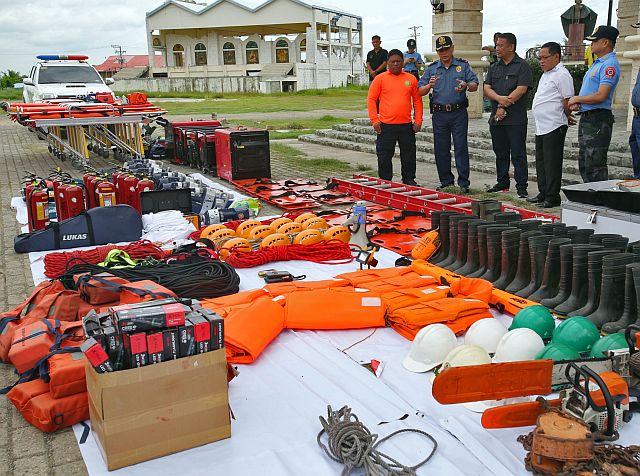 As typhoon Lawin (Haima) began to intensify into a supertyphoon yesterday afternoon, public agencies in Central Visayas advised government personnel to be on alert, ready to respond to serious problems that may arise today in provinces of Northern Luzon.
With Cagayan and Isabela about to bear the brunt of Lawin’s wrath, the Department of Social Welfare and Development 7 (DSWD-7) said it was now ready to send aid to affected provinces if necessary.

“We will just wait for the request from national government because it is our obligation to respond. We have staff ready to respond to the needs of Northern Luzon,” said Artemia Degamo, social welfare officer of DSWD-7.

Degamo said that DSWD has 54 social workers in the regional office, all trained in “camp management,” who can help oversee the evacuation of affected people and manage evacuation centers in cases of calamities and disasters.

In a press statement released by DSWD’s central office, DSWD Secretary Judy Taguiwalo urged the public to stay vigilant, beef up their preparations in their own homes and follow the announcements of local authorities for their own safety as Lawin is not an ordinary typhoon.

“We do not want a repeat of what happened during ‘Yolanda.’ We request the public to cooperate with us and with their local governments so that everyone will be safe,” said Secretary Taguiwalo in a message written in Filipino.

The Office of the Civil Defense in Central Visayas (OCD-7), meanwhile, prepared for the possible deployment of members of its rapid assessment and needs analysis team to Luzon.

Dennis Atto, OCD-7 training officer, said they were awaiting advice from the National Disaster Risk Reduction Management Council (NDRRMC) on whether Visayas personnel were needed to help gather and consolidate reports in Luzon to determine the immediate needs of typhoon victims there.

OCD-7 has raised the blue alert status, which calls for a constant 24-hour monitoring of the effects of the weather on the southwest monsoon or habagat, as this is expected to bring heavy rains to Cebu.

Atto said the OCD is now in coordination with the Philippine Coast Guard Cebu Station rescue team and local disaster offices especially in the islands of Bantayan, Camotes and Olango in Cebu and in islets located in neighboring Bohol province to prevent any untoward incidents.

As this developed, four barangays in Lapu-Lapu City, which underwent an evacuation drill early this month, are ready to face any possible occurrence of a storm surge as supertyphoon Lawin was expected to bring rough seas and strong winds.

Officials identified Barangays Tingo and Baring in Olango island and Barangays Ibo and Buaya in mainland Lapu-Lapu City as villages that were prone to storm surges because of their location facing the northeastern side of the island.

Lapu-Lapu City Mayor Paz Radaza has ordered Berame to constantly communicate with barangay captains especially in coastal areas, while the City Engineering Office has been tasked to monitor the city’s flood-prone areas.

In Cebu City, an inventory of city-owned search and rescue equipment was conducted by city hall officials along with the city’s police force.

“Although we are not really expected to be directly hit, but it’s important now for us to prepare. We have to strengthen preparations in families and households. What’s most important is that people are proactive,” said Cebu City Disaster Risk Reduction and Management Office (CCDRRMO) head Nagiel Bañacia.

He reminded the public to check on their houses, especially those located within urban centers, for areas that might need repair or replacement in order to withstand intensified rains that might still affect Cebu due to supertyphoon Lawin.

The CCDRRMO also advised the Regional Disaster Risk Reduction and Management Council that they were ready to assist affected areas in Luzon.

“We put ourselves on high alert in case there is a need for reinforcement or assistance in northern Luzon. They were hit by typhoon Karen and now supertyphoon Lawin,” said Bañacia.

Aside from personnel from the CCDRRMO, the city will also seek the help of the Emergency Rescue Unit Foundation (Eruf) and medical doctors in case a response team from Cebu City will be needed for deployment.

Bañacia said, though, that they will await advice on what kind of help will be needed from the city by the affected areas.