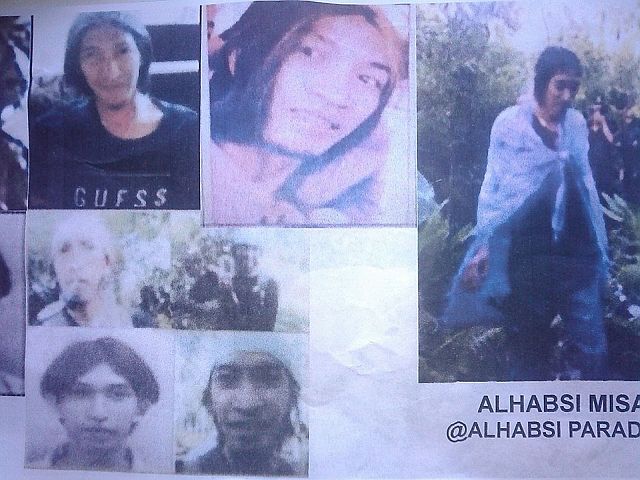 Police distributed pictures of a certain Alhabsi Misaya, who allegedly lead a group of six Abu Sayyaf members in a trip to Cebu over the weekend to different malls and establishments for the public to be on the lookout for (Brigada Benjie Talisic).

Amid intelligence reports that six members of the Abu Sayyaf were in Cebu over the weekend, the Police Regional Office in Central Visayas (PRO-7) on Monday appealed to the public to be extra vigilant.

“The police has been alert since Friday night. After receiving the report from our police counterparts in Mindanao, we immediately alerted our teams and the different security officers of our malls, lodges, and beaches,” said Supt. Julian Entoma, chief of the Regional Intelligence Division.

The intelligence reports, however, remained unverified and unvalidated.

According to Entoma, the Police Regional Office 9 in Zamboanga alerted them about the Abu Sayyaf Group led by a certain Commander Alhabsi Misaya, who reportedly visited Dumaguete City before proceeding to Cebu last Saturday.

Police could not determine the group’s exact location in Cebu. Entoma said its members likely stayed either in Cebu City or Talisay City.

Photographs of Misaya were disseminated to the different police stations in Cebu as well as in malls and other business establishments to alert security officers and mallgoers and help avert the plans of the group.

Based on the intelligence reports, the terrorist group was planning to abduct foreigners and prominent personalities as well as to bomb malls and other establishments in Cebu.

On Sunday, Entoma said the police regional office in Zamboanga City reported that Misaya’s group was seen in their area and that its members may have already left Cebu.

“But we are not certain whether all six members returned to Mindanao. We, nevertheless, continue to monitor,” he said.

He asked the public to relay information on suspicious people or strangers within their community.

“We are particularly asking assistance from our Muslim brothers who are here in Cebu. Because these members of Abu Sayyaf have a tendency to look for local contacts. The last time, that’s how we worked it out,” he said.

Considering that there are already intelligence reports reaching the authorities, the mayor said the city as well as law enforcement agencies should not take this for granted but must take it seriously.

Although he admitted that he cannot personally verify the information reaching the police, he said it is of utmost importance for the public to continue to be collected and proactive.

“We just ask the public to be more vigilant regardless if they’re here or not. This is our city. Security is everybody’s concern,” he said.

The Cebu Chamber of Commerce and Industry (CCCI) encouraged its members to immediately report to authorities questionable personalities amid police reports of Abu Sayyaf presence in Cebu.

Melanie Ng, CCCI president, said the business organization is closely working with the Philippine National Police (PNP) on the matter.

“As such, in light of the latest warning from the PNP, we enjoin the business community to be extra cautious and exercise increased security measures in the various public and private business establishments,” she told Cebu Daily News in a text message on Monday.

She said it is always prudent for businesses to exercise caution and security in the conduct of daily activities and operations.

The Mandaue Chamber of Commerce and Industry (MCCI) also joined the call of the PNP to be vigilant for possible terrorist attacks.

MCCI President Glenn Soco said the chamber has informed its members to profile their respective employees, tenants and suppliers, and report to authorities any unusual or suspicious activities.

“Our law enforcers deserve all the support that they can get and that each and every citizen should have a stake in our fight against terrorism,” he said.

“We immediately heightened our alert status and directed operating units to intensify security operations over the weekend while in the process of validating the report,” he said in a press statement.

“We call upon the people to be vigilant and closely coordinate with the security forces (Centcom and PRO-7) to stop any terrorist groups from putting people’s lives in danger,” he added.

Both the PRO-7 and the Central Command have been placed under full alert status since September 3, a day after the bomb attack in a night market in Davao City that killed at least 15 people and wounded about 60 individuals.

Numerous checkpoints have been conducted while additional police troops were sent on the field to ensure the safety of the public.

PRO-7 Director Chief Supt. Noli Taliño urged the people to stay calm but to be alert against any attempt to destroy peace and order in Cebu and other parts of the region.
“People should just be calm and report any suspicious-looking person or any unusual activity to the nearest police station,” he said in a text message.

On the other hand, Senior Supt. Joel Doria, director of the Cebu City Police Office (CCPO), said policemen have not actually seen Misaya’s group at least in Cebu City.

“There were reports about the group’s presence in Cebu. Although these are subject to validation, I should say we are ready,” he told reporters in a separate interview.

“People should not worry too much. There’s nothing to be alarmed of (for the time being). Our policemen are always ready,” he added.

Doria said all policemen are not allowed to take a leave of absence except if they are either sick or when female police officers give birth.

“The people of Cebu City are safe. I can assure you that. Your policemen are ready to secure you,” he said.

The police also sought the help of the Muslim community in Metro Cebu to monitor the presence of Misaya’s group.

“Kidnap-for-ransom has become their bread and butter now. That was what they were here for although there was a possibility that they also wanted to bomb malls and other establishments,” Entoma said.

Malo Manunggiring, director of the National Commission on Muslim Filipino in Central Visayas, said he immediately asked his subordinates to check whether or not members of the Abu Sayyaf group were in Cebu.

But so far, he said, they have not monitored any member of the terrorist group in Cebu.

“There was really none. I believe that is just a false alarm,” he said in an interview.
Manunggiring said he is closely coordinating with PRO-7 to monitor Muslims in the region and to avert terror attacks.

“I assure the public that the Muslim community in Cebu are peace-loving. To be honest, we will not allow anyone to distract the peace and order situation here,” he said.

“If there are terrorist groups from Mindanao who will come to Cebu, I want them to be arrested immediately. We do not condone violence,” he added.

There are currently about 40,000 Muslims in Cebu City, and up to 120,000 in the entire Central Visayas, Manunggiring said.

“We are with the police in maintaining peace and order here. We know our policemen are doing everything to protect and serve us,” he said.

Cebu Gov. Hilario Davide III, however, doubts the veracity of the reported presence of Abu Sayyaf members in the island.

“I doubt that. That is only tsimis (rumors),” he said in a brief interview./with reports from Nestle Semilla.

Read Next
MSMEs should learn to be disaster resilient — DTI