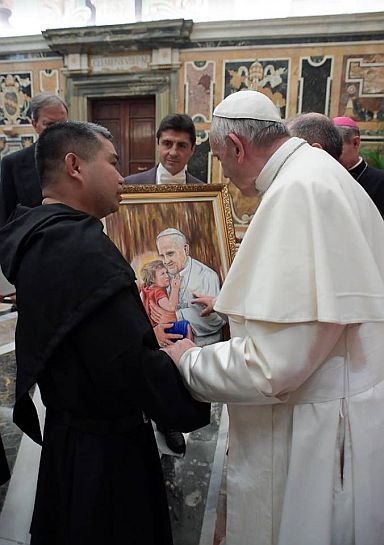 A framed painting of the image of Pope Francis embracing the Christ-child, with the face of a three-year-old Syrian refugee who drowned with his mother and brother in the Mediterranean Sea while trying to reach safety in Europe and the West, is the gift of the Order of the Augustinian Recollects (OAR) to the Supreme Pontiff of the Roman Catholic Church.

“Beautiful, I like it. Please pray for me, young man,” Bro. Jaazeal Jakosalem, OAR, quoted Pope Francis as saying when Jakosalem handed Francis his painting titled “Embracing Mercy” at the Sala Clementina, a hall in the Apostolic Palace near St. Peter’s Basilica in Vatican City, Rome.

Brother Jakosalem presented the gift after the special papal audience granted to the Order of the Augustinian Recollects OAR last October 20.

Jakosalem, who is also the property administrator of the University of San Jose-Recoletos (USJ-R), created the framed artwork with his protege, Melvin Lañas, a working scholar at USJ-R where he is a second-year financial management student.

Jakosalem, a liturgical artist, went to work on the project after he was commissioned by Fr. Miguel Miro, OAR, the Prior General, to create a work of art to be given to Pope Francis on the scheduled special audience.

“Much fitted to the concluding celebration of the Jubilee Year of Mercy, the artwork shows a deliberate message of the Church’s utmost care for migrant children,” Brother Jakosalem wrote in an article published in the Recollect website.

The framed artwork, an oil on canvass measuring 20 x 30 inches, shows the image of Pope Francis embracing the Christ-child, with the face of Aylan Kurdi, the Syrian child-refugee who drowned while trying to reach the safety of Europe.

He bore the stigmata, the marks corresponding to those left on Jesus’ body by the crucifixion.

“‘Embracing Mercy’” symbolizes the Church’s ‘motherly’ attitude on the plight of the refugees,” Brother Jakosalem wrote at the back of the painting, “and Pope Francis personally lives it as his own advocacy.”

“In the face of this global crisis, the Church embraces the many faces of injustice brought about by poverty, neglect and indifference of rich nations,” he added.

Lañas, a 20-year-old artist from Consolacion, northern Cebu, felt proud when asked how he felt about his work being presented to the pope.

In a message intended for the 2017 World Day of Migrants and Refugees, Pope Francis said, “I feel compelled to draw attention to the reality of child migrants, especially the ones who are alone.” 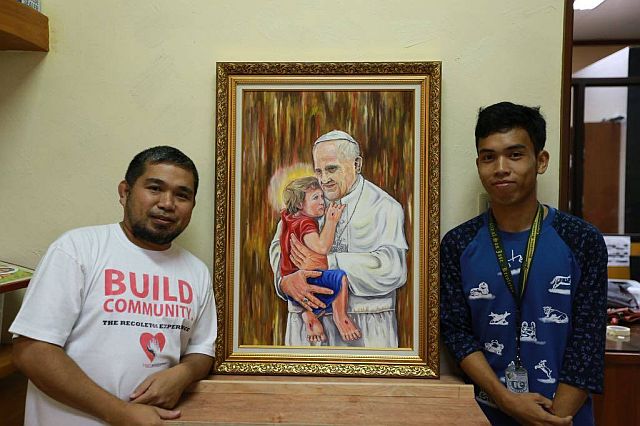 “In doing so, I ask everyone to take care of the young, who in a threefold way are defenseless: they are children, they are foreigners, and they have no means to protect themselves. I ask everyone to help those who, for various reasons, are forced to live far from their homeland and are separated from their families.”

The Augustinian Recollects from all over the world are convening in Rome for their 55th General Chapter where for three weeks, they have been reflecting on the challenges the Order faces and working out ways to make the Order more efficient.

The General Chapter of the Augustinian Recollects is the supreme authority within the Order. It takes place every six years and it examines the status of the institution.

The Prior General and his counselors are also elected in it, and these then prepare a plan to put into operation the decisions taken by the members of the Chapter over the subsequent six years.

The Order of Augustinian Recollects OAR is more than 400 years old. Today, they are more than 1,000 religious men that work in missions, parishes, schools and colleges in 19 countries.

In the Philippines, they run sister schools USJ-R, University of Negros Occidental-Recoletos and San Sebastian College-Recoletos, among others.

Read Next
WHAT’S AILING THE CESAFI?