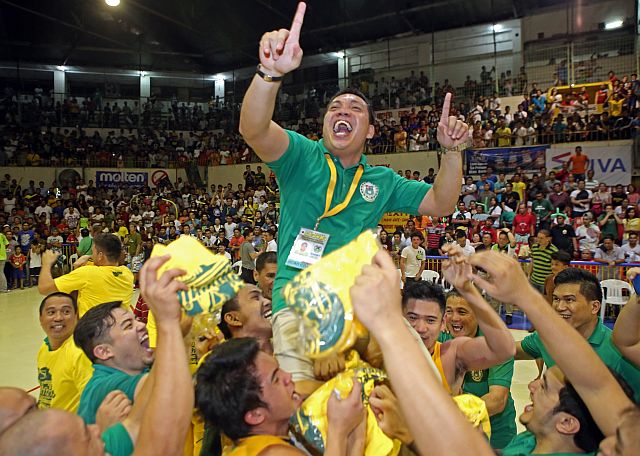 Days after the conclusion of the 2016 Cesafi season which saw the University of the Visayas (UV) Green Lancers capture their 11th championship after prevailing over the University of San Carlos (USC) Warriors, the question that is begging to be asked remains: where did the crowd go this season?

While previous finals duels were almost always standing-room-only affairs, this year’s clash drew a scarce crowd. Cebu Daily News went and asked players, coaches and basketball observers alike about what they thought is ailing Cebu’s premier inter-collegiate basketball league and what is keeping fans from watching the contests.

“For this season, I think the fans were looking forward to a UV-Southwestern University finals showdown, and rightfully so,” said USC head coach Rommel Rasmo, who fell short of becoming the first coach to sweep both the high school and collegiate crowns after earlier guiding Ateneo de Cebu to the juniors title.

Former USC great Nino Ramirez assessed that the lack of true-blue collegiate stars in today’s league is keeping fans’ interest at a minimum.

“I read articles and watch videos from time to time and I don’t see or hear any exciting players playing for the schools anymore, aside from Macmac Tallo and the very good point guard from UV that went to Manila to play for UP (Jun Manzo), there is not that much buzz. I still remember when I left for Canada, I can still hear lots of buzz, since Greg (Slaughter), Junemar (Fajardo), Sam (Hermosa), Giovanni (Padillo) and players from SWU were very exciting,” Ramirez shared.

“Before, every team had their stars or main guys. UC had Allain Abellanosa who could score in bunches. SWU had athletic wingmen and a very exciting point guard. UV had Greg, Ariel Mepana, Mike Luga, Von Lanete and Chum. USJ-R had Lyndon Gudez, Jan Malinao and Armand Ponce and CIT-U had Sherwin Abobo.”

Former UV player Ritchum Dennison said that people wanted to come watch the games because they were thrilling and physical.

“I think the fans are not interested to watch anymore because of the new rules now. Nipis na kaayu ang tawag sa referees unlike during our time when the games were very physical and thrilling to watch. Now, it’s boring.”

“I think the factor that greatly affected the attendance is the format of the games that they are implementing today. SWU and UV is a great match-up. If they were the ones playing, the crowd wouldn’t be like that,” Auditor, who also played for UV and UC, said.

SWU athletic director Mike Reyes said that the tournament’s finals often coincide with either the semestral break or the final exams of the students.

University of San Jose-Recoletos head coach Jun Noel also took notice of the lackluster attendance and said, “People weren’t satisfied with what they saw. They already knew what was going to happen. Jampacked man ni sauna. Something really needs to be done.”

The league’s chief physician, Dr. Rhoel Dejano, pointed to the lack of school pride amongst students and the rundown venue as possible culprits for the lack of attendance during the games.

“Students should have a sense of school pride. As long as the students and the school administration will encourage their students to watch, then we can expect a sizable crowd in the audience. In Manila, they even have school buses to transport their students from the school to the playing venues. They take pride in wearing the color of the school and they cheer for their team with so much gusto. We don’t see that here. Majority of students don’t even have the idea of what the Cesafi is,” said Dejano who added.

“Furthermore, Cebu does not have a good venue for sporting competitions. We have been overtaken by other cities in terms of sporting facilities. If I’m a paying spectator, why would I spend for a venue that is warm, with outdated chairs and most of all, lack ample parking spaces?”