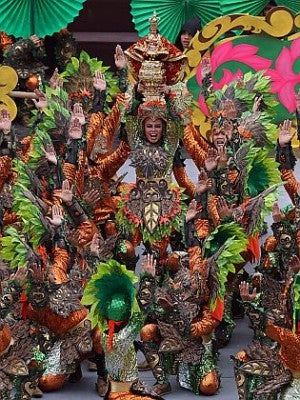 It was sweet triumph for the Lumad Basakanon, Cebu City’s favorite Sinulog champion, which regained its no. 1 status in the annual dance competion of the biggest festival of the country.

Synchronized steps, drama and a dance plot that included a volcano eruption sealed the victory of the urban dance troupe in the Free Interpretation category, a title won in 2004, 2005, 2007 and 2008.

The Baskanons won honor and a P1 million prize in the 2014 Sinulog parade, which had floats, dance contingents, and “higantes” or papier mache giants occuping the city’s main streets in cool, clear weather.

Police officials estimated 2.1 million people in the parade route and grandstand, which was less than the 2013 turnout of 3.5 million, likely due to the recent calamities affecting Cebu and the Visayas.

An out-of-town contingent from Placer, Masbate province gave the best performance in the Sinulog-based category, where dancers have to follow tradition in the beat and dance steps of the sinulog, as a prayer dance in honor of the Sto. Niño, Cebu’s patron.

There was a drizzle during the 9-hour parade. Otherwise it was “perfect Sinulog weather” said weather scientist Mahar Lagmay, who posted in Twitter a forecast of “20 percent chance of rain” at 11 a.m. after all-week forecasts of heavy rain and the threat of typhoon Agaton.

The parade ended at 6 p.m. with grand finale and fireworks in the Cebu City Sports Complex where the main performance and judging was held for 129 contingents, 30 of them dance troupes.

There was less shoving, less intrusions in the dance space of Sinulog contingents on the road this year, an improvement from past parades.

The program went as scheduled.

Gates at the Cebu City grandastand opened at 7 a.m. for spectators whose new QR-code ID passes were inspected, but caused no delay in flow.

The stadium was full, despite an increase in ticket prices. The cheapest seats at P500 was now P800, and the most expensive seats, reserved for balikbayans, was P2,500 or more than double its previous rate.

Rama said it was understandable that there were fewer contingents this year for the contest because of the recent calamities (four less dance troupes), “but we made up it with the people surge”, referring to thousands of visitors who came to Cebu for the sinulog.

“I thank the Lord that I’m able to join you in this celebration. My family joins me in greeting you Pit Senyor!” he said.

Out of 35 dance troupes, one backed out, San Roque Talisay, due to financial constraints, and another, Azami Japanese KTV Bar, was disqualified from the contest for having only 30 dancers instead of the minimum of 100 and failing to attend rehearsals, said Ricky Ballesteros, Sinulog Foundation Inc., executive director.

But the Azami dancers were able to join the parade and dance on the streets as a guest contingent.

Chief Supt. Danilo Constantino, director of the Police Regional Office 7 (PRO-7), said their crowd estimate showed there were 2.1 million in the grandstand and parade routes, lower than last year’s 3.5 million.

Organizers were satisifed with the turnout.

“Puno na man ni (It looks filled up) and it is in fact better this way because this is easy to control when it is not overcrowded,” said Ballesteros.

Light rain fell several times but the show went on.

A male dancer from the Lapaz National High School in Bogo City slipped on stage at 11 a.m.

Quick response teams were at every corner of the grandstand bleachers which started to fill up tp its 15, 000 capacity by noontime.

Paramedics treated a VIP section guest who almost fainted and complained of difficult breathing. Emergency personnel, policemen and soliders took positions in the sports center at 6:30 am.

The grand finale had a cast of over 800 performers, many in glittering, red costumes waving their hands in the air to the strain of “Bato Balani sa Gugma”, a hymn to the Santo Nino as an icon of the Holy Child appeared on a banca “sailing” across a sea of white bolts of fabric.

A graceful woman in white, 2013 Festival Queen Jamie Herrell, danced the sinulog with the Sto. Nino in her arms.

A voice boomed “No earthquake or calamity is strong enough to bring us down. Faith withstands all.” 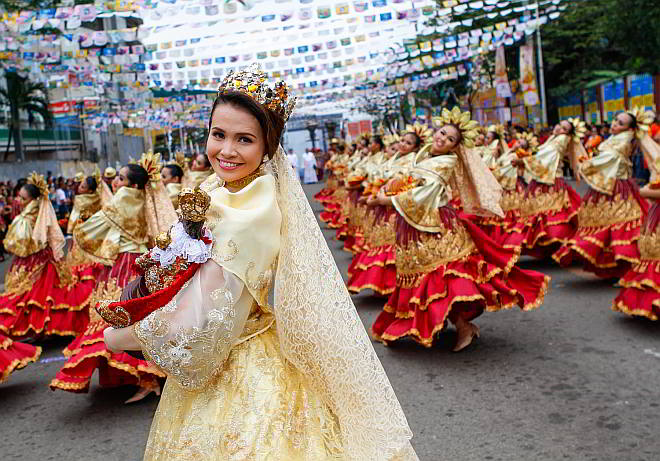 Voice of the Philippines finalist Eva delos Santos belted “Love on Top” by Beyoncé, “Grenade” by Bruno Mars, and the Visayas song “Sa Kabukiran” to the delight of the grandstand spectators.

Her daughter Monique sang “Roar” by Katy Perry. The duo then sang “Just Give Me a Reason”, “Usahay”, “Alone” and “Mama.”

Read Next
‘Care for the voiceless, the powerless, poor’