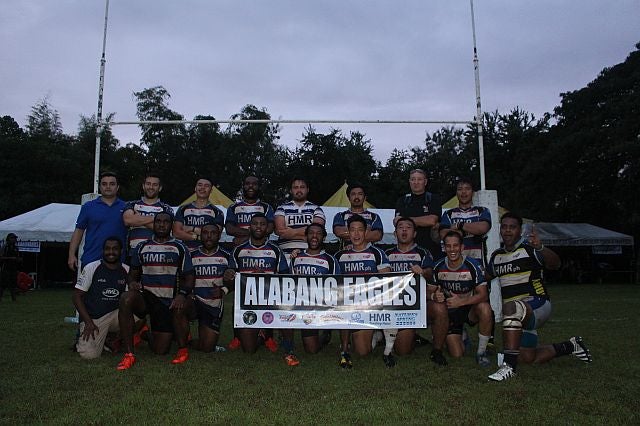 The Alabang Eagles whoop it up after they won their fifth straight title in the 9th Annual International Cebu 10’s Rugby Festival. (CDN PHOTO/RABBONI BORBON)

The Alabang Eagles proved too hot to handle for their opponents in the 9th Annual International Cebu 10’s Rugby Festival as they snatched their fifth title yesterday at the rain-soaked Cebu International School football pitch in Barangay Pit-os, Cebu City.

The Eagles blanked all their opponents in the tournament including an impressive 24–0 victory over the visiting Clark Bellied Pigs of Hong Kong in the centerpiece Cup final.

The Eagles ended the first half, 12-0, and never looked back.

They annihilated the Shanghai Dolphins in the cup semifinals, 29–0.

Holding a 4–0–0 (win-loss-draw) record going into the semis, the Philippine Volcanoes–reinforced Eagles never allowed their opponents to score a point for a dominant showing in their pool.

In the Plate final, the Lapu-Lapu Jets conquered the University of San Carlos Warriors, 10–0, while China’s Guangdong River Rats took home the Bowl title after defeating the Paradise Hunters of Papua New Guinea in bowl final, 17–0.

The Low Flying Dragons, on the other hand, was the only Cebuano squad which was able to win a crown after nipping the Davao Durians, 5–0, in the Shield final.

The host Cebu Dragons failed to qualify for the Plate final after falling to the Lapu-Lapu Jets, 0–20, in the semis.

The Dragons were gunning for a good finish this year after a remarkable performance against the Eagles in the Fat Boy 10’s Rugby Tournament in Angeles City last September.

They were the only team that scored against the Eagles in the tournament but eventually lost, 1–10.

The tournament attracted the biggest number of participants with 16 teams since it inaugurated last 2007.

Read Next
‘A big loss for Philippine sports’