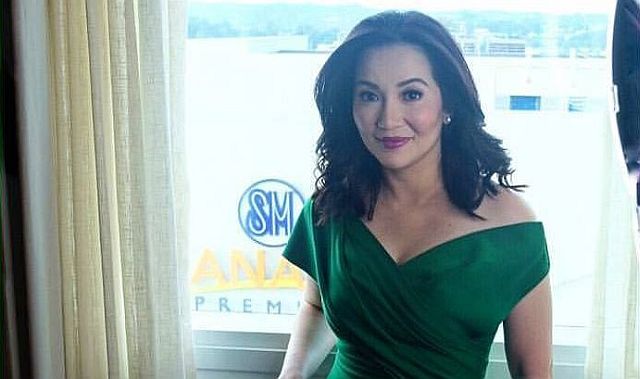 IT COULD have been the biggest comeback for TV host and actress Kris Aquino, but things didn’t go as planned.

President Rodrigo Duterte failed to show up at her widely promoted one-on-one interview last Friday for the Go Negosyo event at the SMX Convention Center in Davao City.

The President was reportedly not feeling well due to a “bad migraine,” coming from his visit to Thailand and Malaysia this week.

The exclusive interview was highly promoted by the Department of Trade and Industry (DTI), Go Negosyo Foundation, and TV5 on newspapers and TV ads, and on state-run station PTV 4.

Everything was going well until the Queen of All Media was informed that the interview had to be cancelled.

“Minsan ang mga first date hindi natutuloy,” said Kris on stage after she was introduced by Go Negosyo founder Joey Concepcion, who broke the news that the Duterte had a migraine.

Kris, looking slimmer in a green dress, said she went on a diet just for the interview and credited comedian K Brosas for the hashtag #GandangDiNapakinabangan in her Instagram post.

Kris hopes that her meeting with Duterte will still push through in the future.

“President Duterte, please give me a chance. I hope one day mamahalin mo rin ako. I apologize again that the date hindi natuloy. I was stood up. But I assume the next time, sisipot na siya,” said Kris.

And if there is one thing that she learned from the experience, it is about being humble enough to admit that she was snubbed by the President himself.

Sharing some screenshots of the positive feedback she got for staying at the event despite the President’s absence, she wrote on her Instagram: “Humble and realistic enough to admit it was an epic snub—but learning so much from Beyonce’s Lemonade.”

And that is, “If life gives you lemons, make lemonade.”

Kris shared that when she knew that the interview got cancelled, she called her brother, former President Benigno Aquino III, predecessor of Duterte.