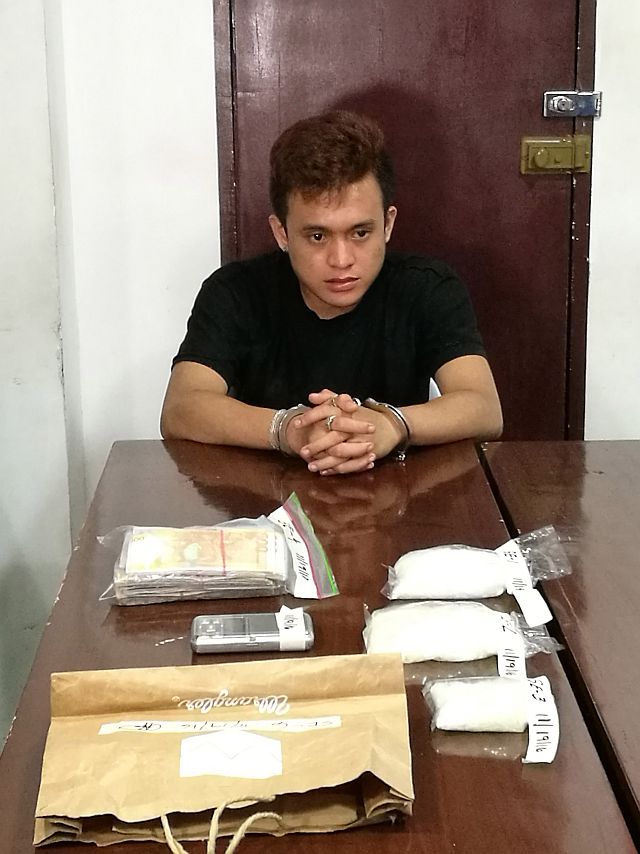 Edwardo Amancio Luzon, 18, is questioned at the Police Regional Office after his arrest in a buy-bust operation in Barangay Labangon in Cebu City. At the table are the suspected shabu confiscated from the suspect (CDN PHOTO/CHRISTIAN MANINGO).

Police confiscated more than P6 million worth of suspected shabu and arrested a former construction worker, two women and the son of a councilwoman in three separate police operations in Cebu and Naga cities in two days.

They also arrested construction worker Edward Amancia Luzon, 18, a resident in the area, who transacted with the undercover police officers during the buy-bust operation.

Supt. Joel Quintero, RSOG-7 chief, said the suspected shabu, which was placed inside a paper bag, was estimated to be worth at least P6 million based on the Dangerous Drugs Board value.

Quintero said that Insp. Ian Macatangay of RSOG-7 led the buy-bust operation aimed at arresting a certain “Sinid” and his cohorts for selling illegal drugs.

However, Luzon was tasked to transact with the undercover policeman which resulted to his arrest.

Quintero said that Sinid, who sensed that Luzon was negotiating with a police officer, escaped.

A hot pursuit operation is now being conducted against the suspect.

In an interview with reporters at the Regional Anti-Illegal Drugs Special Operation Task Group (RAIDSOTG) 7 office, Luzon claimed that he did not know that inside the paper bag were packs of shabu.

He claimed that he was not a pusher and that he was only offered to deliver the brown paper bag to the man, who turned out to be an undercover police officer, for P3,000.

Luzon is now temporarily detained at RAIDSOTG-7 office pending the filing of charges against him.

They also recovered from the suspects cash worth P104,000, whom they believed to be proceeds of Maranga’s illegal trade and P2,000 marked money.

The suspects are now detained at the Cebu City Police Office cell pending the filing of charges against them.

“Wa na ko’y mahimo, tinuyuan man ni nako, mao na man akong naandan (There is nothing I can do about being arrested since I know the consequence of what I am doing. This is what I’m used to),” Lapitan said.

Taken from his possession were four packs of shabu weighing 50 grams worth P200,000, one cell phone and P1,000 marked money.

Getalla said the P200,000 estimate of the 50 grams of illegal drugs was a street value estimate.

He said that the Dangerous Drugs Board had a different value estimate for this amount of drugs.

He, however, did not give the estimate for the DDB value of the confiscated drugs.

“Ang dami niyang (drug) transactions, maraming kumukuha sa kanya (He has numerous drug transactions; there are so many who source their drugs from him),” Getalla said.

Detained at the PDEA-7 cell, Lapitan admitted to Cebu Daily News that he dealt drugs to other pushers in the neighboring towns of Minglanilla and San Fernando and Talisay City.

Lapitan said he had been using shabu since he was 17 years old and had been in and out of rehabilitation centers thrice.

He said he used drugs not only to forget his problems but also to support his wife and three children.