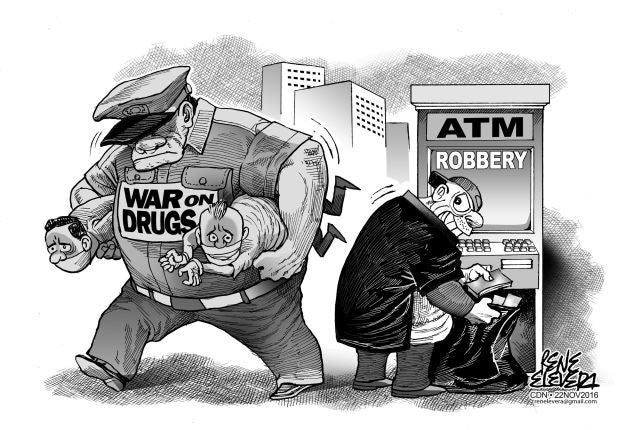 Even if it isn’t Christmas or the holidays, one can reasonably expect robbers to prowl the city streets 24/7 looking for their next victim/s, and today’s technology only made them more versatile and cunning in their thievery.

The ATM robbery scam that victimized seven persons in Naga City and also claimed among its victims Cebu City Councilor Dave Tumulak — ironically the deputy mayor for police matters — showed just how creative today’s robbers are and how vigilant one must be in guarding his or her money in the banks.

Based on news stories that cropped up about these incidents, it all pointed to some foreigner/s being responsible for the online robbery. He/she/they managed to extract the ATM account numbers of the victims and withdraw substantial amounts of money worth more than P400,000 in the past several days.

This they did through “skimming” which meant managing to trace the ATM numbers and using it to withdraw money from their ATM accounts. They can do this by placing minicameras above the ATM screens where it can spot the account numbers being inputted by the depositors or by using special powder and ultraviolet light to detect the numbers used by the depositors to open their accounts.

After receiving information, they use special ATM cards to withdraw the money from the unwitting depositors. In Tumulak’s case, the refusal of the Land Bank of the Philippines (LBP) banks to help him recover the money stolen from him by these scammers is disturbing and a serious cause for concern among small and big depositors who aren’t in government and thus have little to no recourse in recovering their deposits, let alone go after and prosecute the perpetrators.

If a public official like Tumulak can be robbed of his payroll deposited at a government bank, what’s to stop these criminals from robbing other depositors blind?

The assurance by Eugene Rigodon, president of the Cebu Bankers Club, that measures are in place to clamp down on unauthorized withdrawals isn’t all that comforting.

For one, while the banks limit the amounts to be withdrawn from P20,000 to P50,000, it cannot determine and stop the robber from withdrawing as many times as he/she/they can do in a single day or several days.

Thus, we are left for the most part to fend for ourselves when it comes to these scammers. One advice is to keep changing the account password or code at least as frequently as one can manage to keep the scammers from guessing what your account number is.

At the same time, covering one’s hands when encoding the numbers can prevent cameras from detecting one’s account password. And people should keep their money and ATM cards with them at all times.

At a time when the government is diving deep in its muddled campaign against illegal drug syndicates, maybe they should surface, look around and see what other crimes need to be dealt with, like online robbery.

Read Next
Forgive and forget