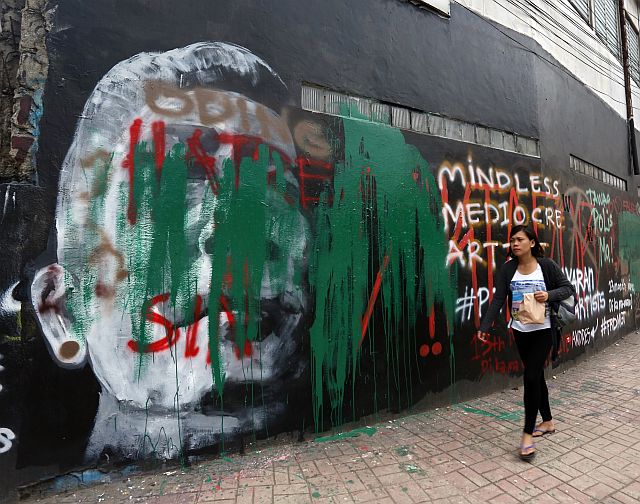 ARTWORK protesting the burial of former president Ferdinand Marcos at the Libingan ng mga Bayani will be posted in Barangays Lahug and Talamban and in Colon Street, as a continuation of the protest action.

This after the mural street art on a wall in Escario Street was defaced.

Anakbayan vice president for the Visayas Niño Olayvar said four by five foot poster-art will be displayed and posted showing pictures of Marcos with a halo on black background, starting today.

Olayvar said this is the support from members of Artista para sa Nasyonalista, Demokratiko, at Rebolusyonaryong Sining (ANDRES) for the protest.
“We will continue to raise awareness through art expression,” Olayvar told Cebu Daily News .

Olayvar said that the halo on Marco’s head shows how some people look at Marcos as saint, forgetting the atrocities committed during Martial Law. At the center of the poster, the words “NEVER AGAIN” in capital letters are printed.

On Friday evening, ANDRES members painted a close-up face of Marcos with the word DIKTADOR.
On Saturday dawn, they were surprised to find that their artwork was defaced.
Students were able to get a 14-second video of the culprits who defaced the artwork.

“The video was recorded by students. They were afraid to stop the culprits because those men were bigger than them,” Olayvar said.

He invited the public to join a protest rally scheduled on November 30 at Plaza Independencia.

There, they will unveil markers of Martial Law victims. At the same time there will also be markers for the nine Supreme Court justices who voted in favor of the Marcos burial at the Libingan ng mga Bayani.

Read Next
NO STRINGS ATTACHED