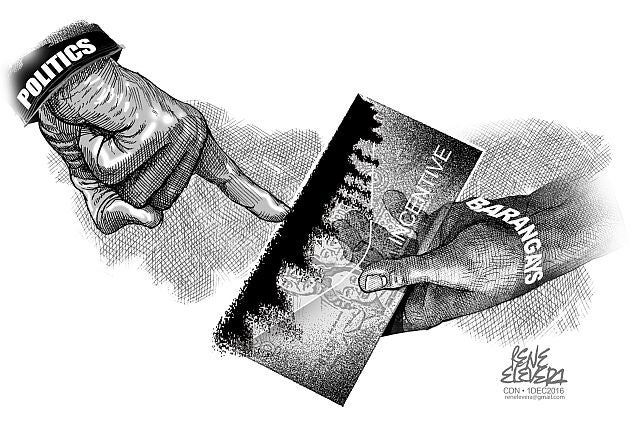 It is a legal opinion, but would Cebu City Mayor Tomas Osmeña heed the Department of Interior and Local Government (DILG) and order the issuance of certifications to barangays to facilitate the release of their share of real property taxes (RPT) from the city government?

That remains to be seen, but the DILG opinion that reiterated that barangays should receive their real property tax shares from the local government not later than five days after every quarter should be a clear reminder to the mayor and his subalterns that the issuance of certifications for the barangays’ real property tax shares shouldn’t be tied to the disallowance issued to their cash incentives.

To recap, the monthly cash incentives ranging from P3,000 to P5,000 were given by former Cebu City mayor Michael Rama to each of the barangay officials last year, with barangay chairpersons each receiving P5,000 a year.

Supposedly, the City Treasurer’s Office required the barangay officials to issue promissory notes to pay back the cash incentives amounting to P28.6 million after the Commission on Audit (COA) issued a disallowance on it.

But nowhere did the COA recommend or advise the city government to require barangay officials and employees to write promissory notes stating that they will refund the cash incentives in exchange for their certifications that they need to plan their budget and secure their real property tax shares next year.

City Accountant Arlene Rentuza said the requirement for barangay officials to issue promissory notes was “standard operating procedure” for disallowances, but withdrawing the needed certifications for the barangays is like putting on hold the share of every barangay of the city’s revenues.

Regardless of who is muddling the issue and whoever one chooses to believe, the plain fact remains that the disallowance and the real property tax shares of the barangays are two separate issues and should not be tied to each other.

It isn’t the fault of the residents of each of these barangays if their officials failed to refund the cash incentives given to them by Rama, and they should receive the share allocated to them by the city government without any conditions.

If the COA deems it necessary for the barangay officials and employees to refund their cash incentives through salary deductions, then they have no other choice but to comply.

For now, they are simply prolonging their agony by appealing their case to the COA. Their constituents need not be deprived of the barangay’s share of revenue that would fund programs and projects beneficial to them.

Read Next
Learning about heritage from George Town