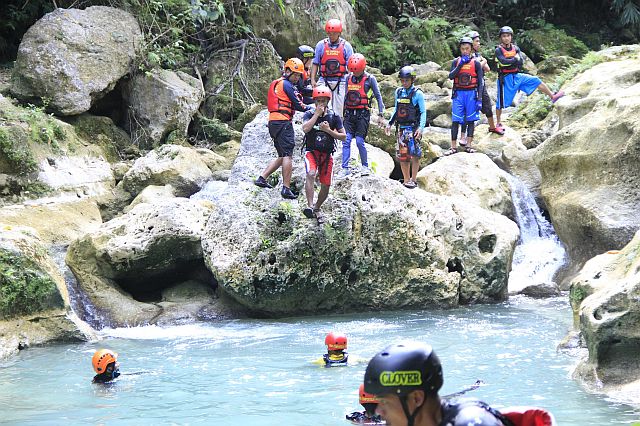 But Badian wants own entrance and exit points for tourists

“Their number one objection is the provision under the EO adopting only one entrance in Compostela, Alegria. I explained to Badian Mayor Carmencita Lumain that it was the findings and recommendation of the tourism officer and I made it clear that I’m not taking sides when I issued this EO,” Governor Davide said.

The governor issued the order last Nov. 5 after he allowed canyoneering activities to resume in Badian and Alegria towns last Sept. 1.

Davide said both towns should co-manage and find ways to sustain tourism in their areas.

The governor’s order seeks to adopt a single holiday, single destination type of tourism for the canyoneering activities in the two towns to better manage its eco-tourism and promote sustainability.

Under this arrangement, all canyoneering activities will start in Compostela, Alegria town and will exit at Kawasan in Badian town.

“Badian town didn’t mind the entrance point in Compostela town but they also want one in Sulsogan. One operator said the jumps in Compostela are pretty high at 15 feet while there are lower jumps of three to four feet at the Sulsogan entrance and some visitors have a fear of heights,” the governor said.

After their meeting last week, Davide assured Lumain that he will consider her  objection and discuss it with Alegria officials.

“I told everyone in our initial meeting last September that the provincial government will not meddle in their affairs but they can’t arrive at an agreement so I had to intervene,” Davide said.