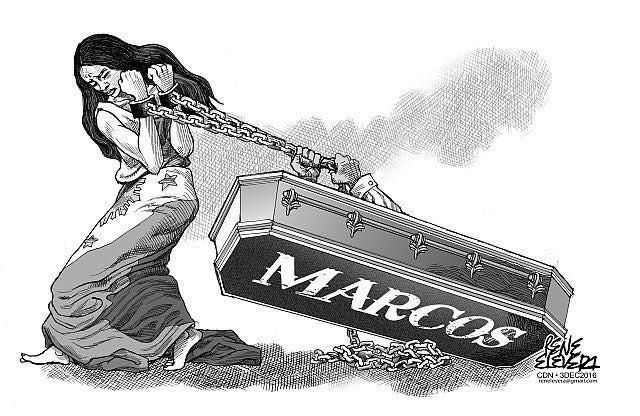 Though size does matter when staging protests — the crowd, the area — it remains to be seen how effective last Wednesday’s protests against the Marcos burial at the Libingan ng mga Bayani is, not only in terms of how the Duterte administration would react to it but also in reminding Filipinos of how the Marcoses have succeeded and continued to succeed in polarizing the country with their acts of deception, the latest being the “open secret” burial of the late dictator.

If last Wednesday’s counterrally by pro-Duterte supporters is any indication of the Duterte administration’s response to the mass protests against the Marcos burial at LNMB, then the protesters can reasonably expect more of these street-level mass actions meant to defuse or downplay their rallies in the eyes of the public.

Both organizers and participants of the anti-Marcos and pro-Duterte rallies have accused each other in social and mainstream media of being paid by their sponsors to stage last Wednesday’s protest actions, an allegation that won’t see any end to being proven or disproved until there’s solid evidence to back it up. And we doubt if the accusers on each side have the paper trail to prove it.

Although the freedom to assemble and air grievances is a right enshrined in the Constitution, it doesn’t guarantee that said freedom won’t be spared from those who would challenge or ridicule the people exercising it.

Such were the recent experiences of those who either took to writing their protest on murals only to have them defaced by Marcos loyalists, or those who rallied at Plaza Independencia only to meet with pro-Duterte supporters who acted as public defenders of the administration.

While there are Duterte loyalists who exhibit civility, tolerance and even openness to those critical of President Duterte’s administration, there are others more narrow-minded whose attacks on people questioning his policies have bordered on cruel to downright vicious.

It doesn’t help any, of course, that the President chooses to brush aside these rallies as he continually exhorts the public to move on and forget about the surreptitious, undercover burial as well as the executions and corruption committed by the Marcoses.

Even if the Marcoses did manage to squeeze in the burial under military cover, they cannot hope to bury with it their dishonored past nor can they and President Duterte force upon the people to forget what had been done last Nov. 18.

Instead of bringing closure, that date will linger on as a stench-filled memory of what the Marcoses did to the Filipino people, and it will last longer than any propaganda they and their allies hope to foist on generations of Filipinos to come.

What will endure instead is the memory of those who, in their own small way, have fought against the Marcos regime without thought of the cost it entailed to their own lives.

Read Next
Help us, Santa Claus