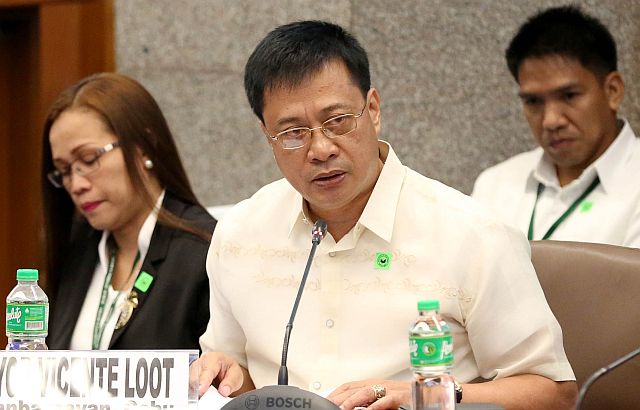 In answer to a question posed by Senator Manny Pacquiao, Kerwin Espinosa claimed that he personally knew Mayor Loot because of a cockpit arena in Mandaue City where he engaged in cockfighting.

According to Espinosa, Chief Insp. Leo Laraga of the Criminal Investigation and Detection Group (CIDG) in Eastern Visayas collected P120,000 monthly from him on Loot’s behalf from late 2011 when Loot was assigned in Region 8 until the general was moved to Camp Crame more than a year later.

The amount of P20,000 of the supposed bribe went to Laraga, Loot’s alleged “bagman,” claimed Espinosa.

Loot then proceeded to read his formal statement before the Senate Committee on Peace and Order.

He said he retired from the PNP after 33 years of service “with untarnished and an unblemished record” and had been a recipient of 83 service medals and commendations.

An alleged “validated intelligence report” linking him to Kerwin contained allegations, which were widely publicized, and tarnished his reputation, he said.

“It is very clear that the intel report is not that intelligent, basically untrue and most likely fabricated by people whose shoes I may have stepped upon and whose report has been capitalized by our political enemies whose influence has reached the Office of the President,” Loot said, reading his statement.

He said that Kerwin had stated that he started his involvement in the illegal drugs trade in 2004, two years after his stint at the Regional Anti-Narcotics Unit (RANU-7), which was from January 2000 to July 2002.

He denied knowing Kerwin and had no personal transactions with him either through the phone or in person.

“In his statement before this Body, he also denied knowing me, as he denied having received payola intended for me,” Loot’s statement read.

Loot belied all the allegations hurled against him and his wife, saying this was a demolition job against him.

He also maintained that most of his wealth was his wife’s.

“Much of what I have now are not mine in the first place. When I married my wife in 1991, she was already a millionaire so to speak while I had practically nothing. By operation of law, her properties became part of the absolute community, a property regime that practically makes her property mine too … My only investment in the said union is my family name that I gave her,” part  of the mayor’s affidavit read.

“With industry and perseverance, my wife was able to grow her net worth, acquire new assets and expand her businesses that when she joined politics as vice Mayor in 1992, two years after our marriage, she already had a declared SALN Net Worth of more than P82M,” Loot said.

Read Next
Tom O remains confident of victory during recount