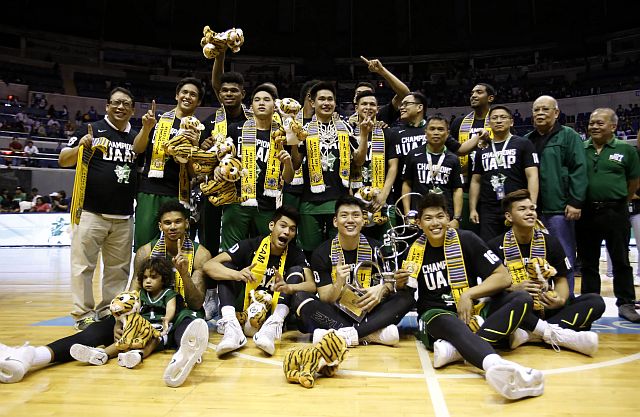 The Green Archers gather at center court to celebrate their victory (INQUIRER).

The La Salle Green Archers capped off a near-perfect season by winning the UAAP men’s basketball title as they swept the Ateneo Blue Eagles with a 79-72 win in Game 2 yesterday at the Smart-Araneta Coliseum.

Mayhem ran supreme for the Archers, who won their ninth championship in their storied history in the league.

But they had to bleed for it in the face of a spirited challenge from the young Blue Eagles, who crawled all the way back from a 14-point deficit to make a game out of it in crunch time.

But Jeron Teng, who was named Finals MVP for the second time in his career, and former Southwestern University reinforcement Ben Mbala, were just too strong and too good down the stretch as they pulled off one crucial play after another to haul the crown back to Taft.

Teng ended his collegiate career with a bang as he finished with 28 points, 19 of which came in the first half alone.

Mbala, recruited out of the Cobras’ lair back in 2012, delivered a performance worthy of the MVP award he was given before the game as he piled up a double-double of 18 points and 10 rebounds, including a layup that put the Archers up 75-69 with 1:13 remaining. Two seconds after that basket, he stole the inbound of Ateneo and canned two free-throws to raise their lead to seven.

Still, Ateneo relented and pulled to within four after a triple by Raffy Verano. But Teng calmly swished two free throws near the end to seal the title for La Salle.

La Salle’s rookie coach Aldin Ayo also made history of sorts as he won his second straight collegiate title just a year after leading the Letran Knights to the NCAA championship.