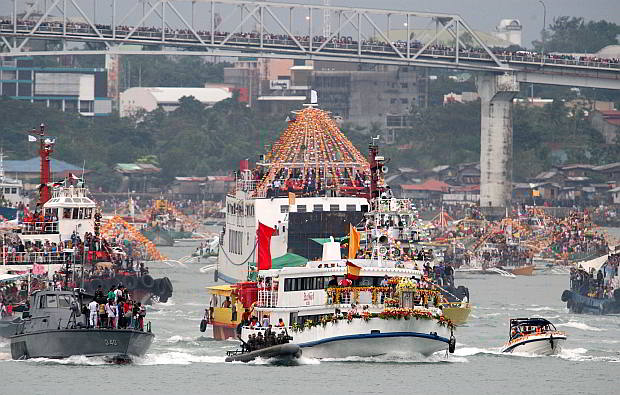 A flower-decked ‘galleon’ brings images of the Sto. Niño and Our Lady of Guadalupe down the Mactan Channel for the annual fluvial procession participated by 130 motor bancas and boats. (CDN PHOTO/TONEE DESPOJO)

The Sinulog Foundation Inc. (SFI) and the Philippine Coast Guard in Cebu are eyeing for a cleaner sea and a more organized staging of the fluvial procession, a highlight in the celebration of the annual Sinulog Festival held every third week of January.

SFI Executive Director Ricky Ballesteros and the new PCG-Cebu Commander Dionelet Antil agreed in a joint effort for a more organize and rubbish-free fluvial procession in next month’s Sinulog Festival during their meeting this afternoon.

Ballesteros said garbage floating at the Mactan Channel has been marring the fluvial procession in the past years and he has coordinated with Antil to solve this problem.

“I want this to be solved because we have many visitors from all around the world coming here in Cebu for that (fluvial procession),” Ballesteros told reporters following his meeting with Antil at the SFI office at the Cebu City Sports Center.

“We must be cleaning it around two or three days before the procession,” he added.

The SFI and PGC-Cebu also agreed to strictly enforce the requirement for those who wish to participate in the fluvial procession.

This year, organizers are expecting at least 200 boats to join in the fluvial parade that will accompany the main vessel or galleon that will hold the image of the Señor Sto. Niño as it crosses the Mactan Channel from Mactan Island to Cebu City. The parade is held starting at dawn of the third Saturday of January, or on eve of the Sinulog Festival, the world-renown annual religious and cultural festival in honor of Cebu’s patron saint, the Señor Sto. Niño (The Child Jesus).

According to the safety guidelines set by the PCG, participants must first secure a permit from the Maritime Industry Authority (Marina) to ensure the seaworthiness of the boats that they will use during the sea parade.

The full guidelines can be found in SFI’s Facebook page.

Antil, who assumed his post only last Thursday replacing Agapito Bibat, was familiar with fluvial parade celebrations since he was previously assigned in Pagadian City in Zamboanga del Sur, which also celebrates the Sinulog Festival, Ballesteros said.

“They also hold a fluvial procession there (Pagadian), so he (Antil) is not new to this,” said Ballesteros.

Ballesteros added they will provide with identification numbers to the confirmed participating boats.

The PCG-Cebu is also considering the plan to ban drones during the procession for safety purposes, he added.