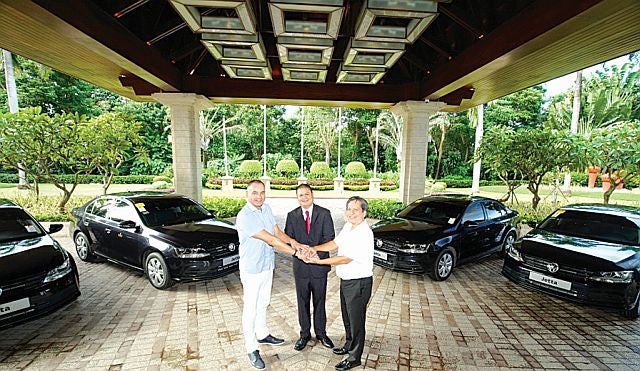 Following Makati Shangri-La’s delivery of its all-new luxury fleet of Volkswagen Passat and Jetta units just a few months ago, Shangri-La’s Mactan Resort and Spa also received its new fleet of Jetta as part of its efforts to upgrade and expand its existing vehicles to cater to its more discerning guests.

The purchase of Jetta cars was arranged through Nissan Car Lease Philippines, Inc. (NCLPI), the same premium transport provider for several of the Philippines’ five-star hotels, in partnership with Volkswagen Philippines, the exclusive country distributor of Volkswagen cars. NCLPI, whose motto “Premium service for premium people,” is among the best-known car rental brands in the Philippines, with 24 years of unequalled service to its distinguished clientele.

The Shangri-La brand name is renowned globally for its rich tradition of innovation and personalized service from the heart. These remarkable standards inspired Shangri-La to select Volkswagen, which delivers the same promise of world-class service and workmanship that embodies the perfect combination.

The sprawling 13-hectare Shangri-La’s Mactan Resort & Spa received its five-star accreditation from the Department of Tourism this October, right after the department rolled out its new star-rating system. The only resort in Cebu to receive such a rating, it has also been included among the “Top Resorts in Asia” and among the “Top 50 Best Resorts in the World” in the recently released 29th Conde Nast Traveler’s Readers’ Choice Awards.

For more information on Volkswagen products and services, log on to www.volkswagen.com.ph.