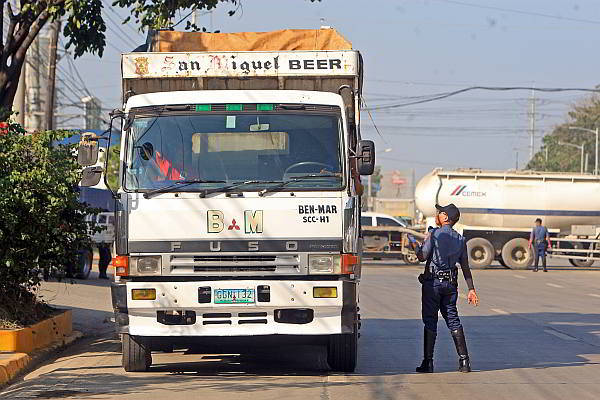 A traffic personnel stops a truck driver passing along S. Osmeña Road early in the morning in this file photo.

The Traffic Enforcement Agency of Mandaue (Team) is reminding garbage truck haulers from Cebu City and Lapu-Lapu City to secure the necessary permits and observe cleanliness when transporting garbage to Consolacion town via Mandaue City.

Glenn Antigua, chief of operations of Team, has reiterated that they will apprehend those violating the city ordinance on Solid Waste Management Act and the Truck Ban, and issue environmental and citation tickets.

The Team had apprehended around six private garbage trucks from Lapu-Lapu City this month after a foul-smelling liquid kept dripping from a truck at UN Avenue.

The truck was advised to return to its destination after being issued environmental tickets.

“They should cover the truck properly with no dripping liquids from it while passing Mandaue so they will not be apprehended,” Antigua said in Cebuano.

This is also the message Antigua wants the private garbage haulers coming from Cebu City to know when they soon start transporting the garbage from the South Road Properties (SRP) going to Consolacion town.

Antigua expects additional traffic congestion when these garbage trucks, which are estimated to be more than a hundred units, start hauling garbage to Consolacion town via Mandaue City.

He also reminded these private haulers to observe the city’s truck ban from 6 to 8 a.m. and from 5 to 8 p.m. every day.

Read Next
Is there peace and order?