A first for Maris 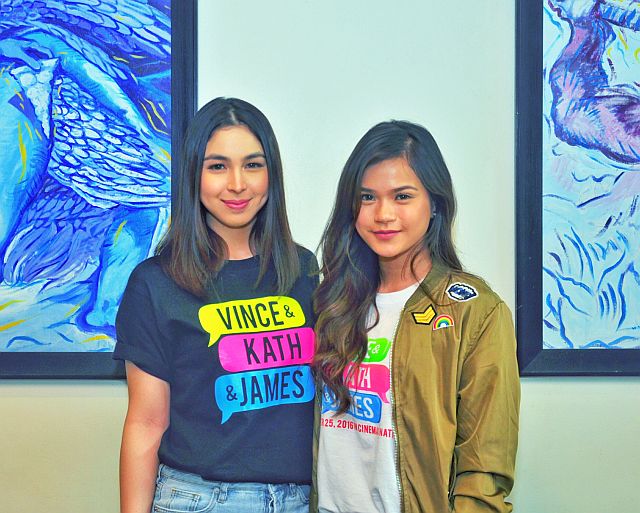 MAKING it to this year’s Metro Manila Film Festival (MMFF) was a running joke among the cast of the Star Cinema film “Vince & Kath & James,” as they were shooting the movie in some areas in Luzon early this year.

As Maris Racal, who plays the role of Maxine, Kath’s bestfriend, puts it, the goal was just to finish the film, and whenever the MMFF topic popped out, they would all just laugh about it while weighing on the possibilities of making the cut out of the many films vying for a spot for this year’s film festival.

“Habang nagsho-shoot kami para sa work lang talaga. Hindi namin siya inisip na this is for MMFF. It was a running joke na makakasali kami sa MMFF at sasakay kami on board our own float, we never expected it,” shared Maris.

That was why, when the film was announced as one of this year’s Magic 8, Maris jumped for joy, surprised with the MMFF results, just like
everyone else in the cast.

“Literal na napatalon talaga ako,” she shared during the film’s press conference in Cebu last December 22. Maris was with the Julia Barretto who plays the role of Kath to promote the movie.

It was Maris’ first time to join the MMFF, same as Julia, Ronnie Alonte (James) and Joshua Garcia (Vince).

The story is about an online series written by Jenny Ruth Almocera, which went viral, that tells the story of two lovestruck teens, Vince and Kath, through text messages.

The 19-year-old former Pinoy Big Brother (PBB) housemate describes her role as funny, talkative and jolly and has been considered as the life of the movie. Her character is not really mentioned in the original story of the viral textserye written by Jenny Ruth Almocera.

When asked about what has challenged her the most in doing the movie, it was playing the role of Maxine.

“She likes to express herself and she’s so different to me. Napakamagalaw niya, challenge siya for me kasi di ako ganun,” Maris said.

Even without a pair for the movie “Vince & Kath & James,” Maris admits to getting used to it so far but admitted to crushing over fellow Star Magic artists Gerald Anderson and Piolo Pascual.

The movie “Vince & Kath & James,” directed by Theodore Boborol, was named by MMFF as one of the top four grossing films this year on its first day of screening. It also won the Children’s Choice Award during the festival’s Gabi ng Parangal last Thursday.