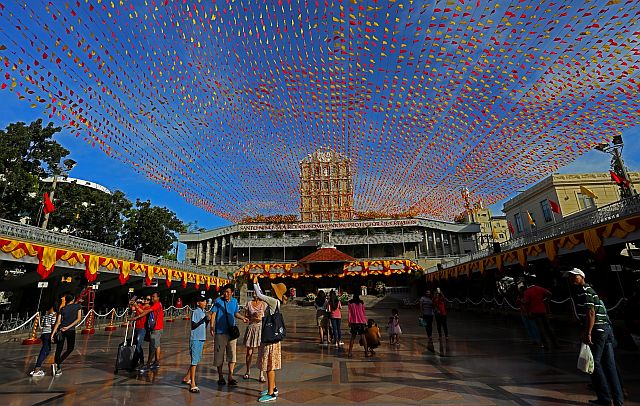 Tourists take photos of the Sto. Niño Basilica’s Pilgrim Center. Hotels are cashing in on the Cebu visitors here for the Fiesta Señor and the Sinulog celebrations. (CDN PHOTO/JUNJIE MENDOZA)

Hotels in Cebu City are expecting high occupancy during the weekend leading up to the grand Sinulog celebration as millions of people participate in the annual parade and feast day of Sto. Niño.

Accommodation establishments on Mactan Island, on the other hand, also expect the same rates as Lapu-Lapu City hosts this year’s Miss Universe swimsuit competition on Jan. 17, two days after the culmination of Sinulog activities.

“We’re now on our high 90s for Saturday and Sunday. Sinulog is a peak season for the hotel. Last year was also the same,” said Ann Olalo, Radisson Blu Cebu’s director for marketing and communications, in a statement sent to Cebu Daily News.

She said that in line with the celebration this year, tourists can witness the famous Sinulog dance at the hotel’s restaurant. The hotel has a total of 400 guest rooms.

Manna Alcaraz, Marco Polo Plaza Cebu’s communications manager, said that they are pleased with their Sinulog bookings this year which is high as usual.

“It has been consistent for the past years. Sinulog continues to be one of the major peak seasons in the hotel,” she said in a text message.

Alcaraz said they are expecting to be fully booked during the Sinulog weekend as they are already in their high 90s as of now. Marco Polo Plaza Cebu has 329 guestrooms and suites.

She said 40 percent of their guests are locals and balikbayans while 60 percent are a mixture of guests from other Asian countries, mostly Koreans.

In 2016, the police estimated around 3 million people who witnessed the Sinulog Grand Parade, which falls this year on Jan. 15, the third Sunday of the month.

An influx of tourists visits Cebu in December to celebrate Christmas and New Year, extending their stay for Sinulog in January to cap their vacation.
Pinnacle Real Estate Consulting Services estimates that Metro Cebu has a total of 9,500 rooms with star classification as of November 2016.

Meanwhile, Jpark Island Resort and Waterpark in Lapu-Lapu City, the venue of this year’s Miss Universe swimsuit tilt, is already fully booked for the event as early as now.

Corporate liaison officer Arthur Lo, in a phone interview, said the hotel’s 556 guestrooms have already been taken as early as November last year, with 200 of these already reserved for the pageant event alone.

“With or without the Miss Universe, we are always fully booked at this time of the year,” he said, crediting the establishment’s occupancy to Korean nationals who are on vacation.

Around 60 percent of their guests are Korean while the rest are composed of other foreigners such as Chinese, Japanese, and a few Caucasians.

Separately, Lapu-Lapu City tourism chief Hembler Mendoza said other established hotels on Mactan Island such as Shangri-La’s Mactan Island Resort and Spa as well as Mövenpick Hotel have already reported to be 90 percent booked for the event.

The rest, he said, are around 70 to 80 percent booked while some two- to three-stare establishments have reported to be fully booked as early as the second week of December last year.

Mendoza earlier gave assurance that the city will have enough rooms for the event, with 87 candidates from different countries together with their entourage and families. He said Mactan has around 5,000 rooms.

On Wednesday, Tourism Secretary Wanda Teo announced that it is “all systems go for the 65th Miss Universe” after multi-agency representatives sat down with pageant organizers and private partners to finalize the two-week itinerary leading to the Jan. 30 coronation night at the Mall of Asia in Pasay City.