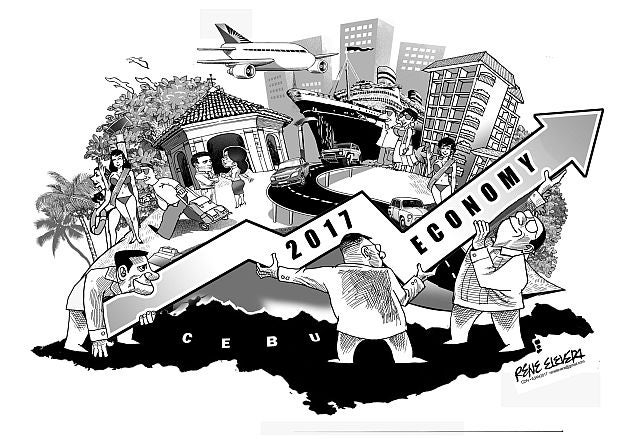 The three-part series on Cebu’s business outlook for this year, with a glimpse into the next few years, looks good at least on paper since, as everyone knows by now, anything can happen between what is set by government planners and what will be decided on by foreign and domestic finance institutions that provide the funds for these programs to be completed.

Of late, two of several (we’d like to believe) cogs driving Cebu’s economy, the business process outsourcing (BPO) and tourism industries, appear to coast on smooth waters at least until US President Donald Trump makes good on his campaign pledge to divert US investments back home.

President Rodrigo Duterte, who says he’s in good terms with Trump, may change his tune afterwards though American and European businessmen may still consider whether or not the cost of transferring their business elsewhere will make good sense owing to factors like cheaper and better qualified labor in the country.

As far as tourism goes, the Miss Universe pageant may even raise the profile of the Sinulog higher in the world stage as the contestants are supposed to join one of the parades of the annual event and the swimwear competition is also set to be held in Cebu.

Yet tourism stakeholders in Cebu may view with some concern the launching of the Panglao International Airport in Bohol province this year which, while greatly easing the congestion of tourist arrivals in the Mactan Cebu International Airport, would probably provide stiff competition to Cebu as the years go by.

But that’s part of the overall government strategy to distribute economic growth in regions and drive investments, livelihood and economic opportunities to the countryside in order to hopefully make people realize that good jobs are available in their own hometown and they don’t have to further contribute to Manila’s congestion by seeking employment there.

While there is little one can do about local and geopolitics, local officials and stakeholders can help lobby for the national government to make good on their promises to continue infrastructure projects that will improve transportation, communication and services that will entice investors other than the Americans, the Chinese and the Europeans to set up businesses in Cebu.

Big-ticket projects like the Cebu International Container Port project and the long-gestating Bus Rapid Transit (BRT) projects are bogged down by changes in the administration which result in a change of plans and in the case of the BRT, of the failure of the past administration to sign off on last-minute requirements like the contracts of the consultants.

But as in every endeavor, it’s always good for planners and policy makers either in government or the private sector to view 2017 as a wide arena for growth and progress regardless of the many challenges one faces ahead.