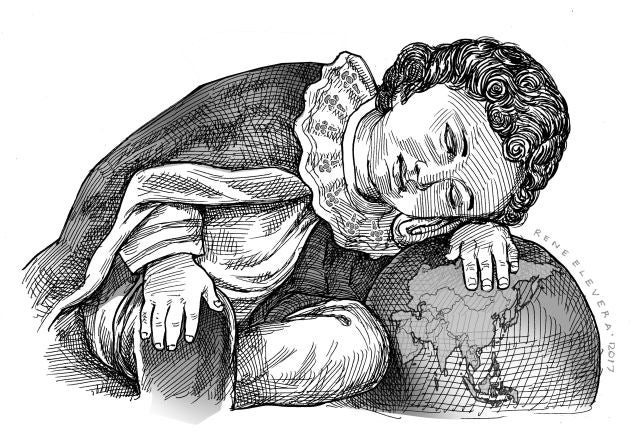 On the sixth day, the wife and I finally made it. Earlier concerns about our not getting parking space and lacking the stamina to keep standing throughout the Holy Mass at the jam-packed Pilgrim Center made us hesitant to attend any of the nine novena masses in honor of the Child Jesus, whose feast falls on the third Sunday of January. But as the days progressed, we began to regret passing up attendance at the novena masses of the biggest feast of Cebu, at which countless others, many of them frailer than ourselves, and pilgrims in the thousands from places outside the island, consider their presence as a special grace.

Initially, we decided to go on the fifth day, but the weathermen had raised a storm warning, which the heavy rains confirmed, and so we settled for the next day instead, expecting it to be sunnier. And yet the rains kept on and showed no signs of staunching. Still we chose to go. We parked the car in the pier area, a third of a kilometer away from the shrine. Seeing that the downpour had remained constant and the streets were submerged in ankle-deep water, we put on the rubber boots and raincoats, which we had kept under the car seats, and trudged towards the shrine. Along the way, we joined a growing stream of people flowing towards the Pilgrim Center. We momentarily stopped before a stand of fire, having handed some coins to a young vendor to light candles for our intentions. And then we slipped inside.

The ground area offered us no space, and so we climbed up the steps to the open deck that enclosed the shrine like a horseshoe with the main altar as center. From there we saw a kaleidoscope of umbrellas, thousands of them, spread out below us.

The Holy Mass transpired under heavy rain, which clearly failed to douse the fire of devotion aflame in the pilgrims, who instead of retreating only increased in number. We ourselves got infected by the happy contagion of faith, such that, during the Offertory, when the faithful sang Bato Balani sa Gugma, the traditional hymn to the Sto. Niño and the official anthem of the celebration, with brisk and cheerful readiness we waved our hands towards the statue of the Holy Child above the altar.

Idolatry? No. We addressed our singing and gestures to Jesus himself, God become man, whom this more than six-hundred-year-old, one-foot wooden figure represents. The statue itself speaks of Cebu, its culture and history—a gift that Ferdinand Magellan presented to the wife of Humabon, ruler of the port of Cebu, which was unheard of for 44 years, retrieved by Miguel Lopez de Legazpi’s men from the ashes of a burning house, installed in a temporary shrine, and unceasingly venerated by the natives, who eventually claimed it as their own, their veneration of it undiminished despite Cebu’s decline when the Galleon Trade bypassed the port in favor of Manila, the devotion to which rapidly built up when the king of Spain opened Cebu to world trade and in time transformed it from backwater to cosmopolis.

The hymn or Gozos narrates the role of the image in Cebu’s history and Christianization, between the repeated singing of the antiphon, during which the people wave their hands:

That name happens to be the Most Holy Name of Jesus, the God who assumed our humanity and became a child for our sake. The same Lord who, Matthew writes, used a child to convey to his disciples the nature of greatness: “Amen, I say to you, unless you turn and become like children, you will not enter the kingdom of heaven. Whoever humbles himself like a child is the greatest in the Kingdom of heaven. And whoever receives one child such as this in my name receives me.”

And what does it mean to become like a little child? The atheist and philosopher Edith Stein, who converted to Catholicism and joined the Carmelites and died a martyr in Auschwitz, gives us this rule of thumb:

“Lay all your cares about the future trustingly in God’s hands, and let yourself be guided by the Lord just like a little child…”

A similar sentiment might have inspired a local sculptor to carve the Sleeping Sto. Niño, which depicts the Infant Jesus’ complete abandonment to the Father.

This attitude we found mirrored in two innocent street children. During one of the novena masses to the Sto. Niño years ago, we passed by a boy, asleep, sitting on a ledge, his back against a wall, cradling his little sister, likewise asleep.